Liquid metal electronics like antennas are intriguing because the shape and length of the conducting paths that form an antenna determine its critical properties such as operating frequency and radiation pattern. Using a liquid metal, such as eutectic gallium and indium, allows for modification of antenna properties more dramatically than is possible with a fixed conductor.

But a significant and unfortunate drawback slowing the advance of such devices is that they tend to require external pumps that can't be easily integrated into electronic systems, so North Carolina State University researchers set out to create a reconfigurable liquid metal antenna controlled by voltage only.

They created a tunable antenna controlled by voltage by using electrochemical reactions to shorten and elongate a filament of liquid metal and change the antenna's operating frequency. Applying a small positive voltage causes the metal to flow into a capillary, while applying a small negative voltage makes the metal withdraw from the capillary. 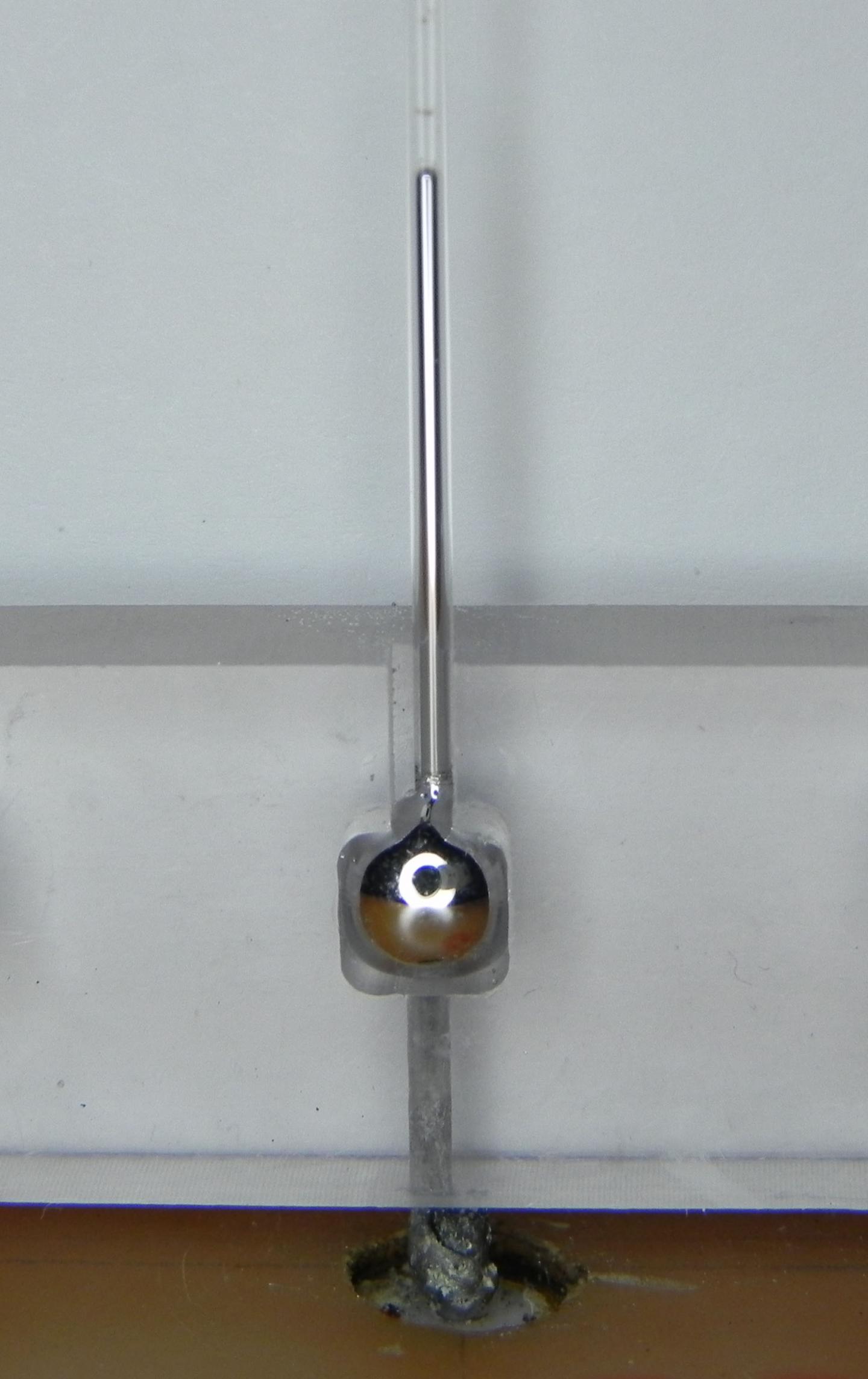 The team's work was inspired by a phenomenon recently observed during studies of liquid metal by co-author Professor Michael Dickey's group within the Department of Chemical and Biomolecular Engineering at NCSU. By placing an electrical potential across the interface between the liquid metal and an electrolyte, they found that they could cause the liquid metal to spread by applying a positive voltage -- or to contract by applying a negative voltage.

The positive voltage "electrochemically deposits an oxide on the surface of the metal that lowers the surface tension, while a negative potential removes the oxide to increase the surface tension," explains Jacob Adams, coauthor and an assistant professor in the Department of Electrical and Computer Engineering at NCSU. . These differences in surface tension dictate which direction the metal will flow.

This advance makes it possible to "remove or regenerate enough of the 'oxide skin' with an applied voltage to make the liquid metal flow into or out of the capillary. We call this 'electrochemically controlled capillarity,' which is much like an electrochemical pump for the liquid metal," Adams noted.

Although antenna properties can be reconfigured to some extent by using solid conductors with electronic switches, the liquid metal approach greatly increases the range over which the antenna's operating frequency can be tuned. "Our antenna prototype using liquid metal can tune over a range of at least two times greater than systems using electronic switches," he pointed out.

Myriad potential applications await within the realm of mobile devices. "Mobile device sizes are continuing to shrink and the burgeoning Internet of Things will likely create an enormous demand for small wireless systems," Adams said. "And as the number of services that a device must be capable of supporting grows, so too will the number of frequency bands over which the antenna and RF front-end must operate. This combination will create a real antenna design challenge for mobile systems because antenna size and operating bandwidth tend to be conflicting tradeoffs."

This is why tunable antennas are highly desirable: they can be miniaturized and adapted to correct for near-field loading problems such as the iPhone 4's well-publicized "death grip" issue of dropped calls when by holding it by the bottom. Liquid metal systems "yield a larger range of tuning than conventional reconfigurable antennas, and the same approach can be applied to other components such as tunable filters," Adams said.

In the long term, Adams and colleagues hope to gain greater control of the shape of the liquid metal -- not only in one-dimensional capillaries but perhaps even two-dimensional surfaces to obtain nearly any desired antenna shape. "This would enable enormous flexibility in the electromagnetic properties of the antenna and allow a single adaptive antenna to perform many functions," he added.