We'll find out. The TwingKite,  based on Empa's Tensairity technology, is set to take flight thanks to a  “Venture Kick” jury that is providing 10,000 Swiss Francs in support.

A kite, a reel and a console are the components of this new method for making electricity from wind. Rather than going up a hundred meters, like legacy wind efforts, TwingKite will go up to 300.

The principle is simple: the high-tech kite is fastened to lines attached to the reel in the ground station. The kite rises up to high altitudes with strong winds, which creates tension on the line setting the reel in motion. This movement is then converted into electrical energy by means of electromagnetic induction.

Once the kite reaches its maximum height, the reel pulls it back down so it can rise again. Initial tests in the Bernese Jura region were successful. The team’s objective now is to make the “Twing” even more efficient. The structure is based on the ultra-lightweight Tensairity girder – a beam made of struts, tension elements, a membrane and air, with an enormous load-bearing capacity.  Obviously economic viability is a question mark with so much infrastructure but it's not as suspect as wind vanes and it's proof-of-concept, not an end product.

The kite is being designed to ascend to altitudes of up to three hundred meters, withstand the very strong wind forces and may soon supply our houses with clean electricity from the windy heights. 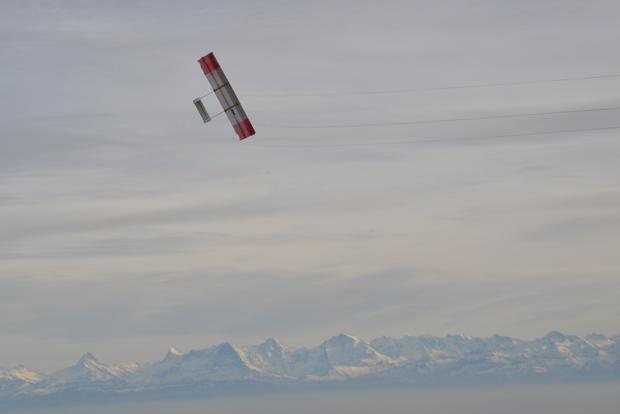 TwingKite looks okay though this bottom part will need some optimization. Credit: Empa.