News Staff
Like sports, want to play into old age without the injury risk? Walking football - or basketball, or lots of other things - might be the answer.

Football - soccer in the United States - is running and kicking. If you change the running to walking, the skill is the same but the injury risk is reduced. Although coaches have long forced players to walk, the same way guitar teachers force players to play a fast piece slowly, as a popular movement Walking Football began in 2011, as a way  to help keep older players involved in football for longer. Players can walk, they can even walk fast, just not run.

The health benefits of walking are well-established and Walking Football just makes it more fun. 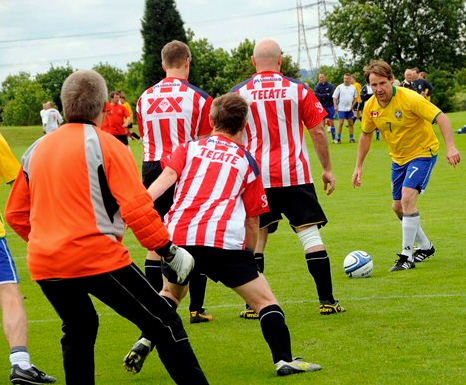 Aston University researcher Peter Reddy has decided to conduct a study to quantify its health benefitsThe investigation will assess two groups of men and women over the age of 48 playing Walking Football once a week for 12 weeks. Participants will be regularly assessed to measure changes in their postural balance, blood pressure and resting heart rate, cholesterol, blood sugar and bone density – all indicators of general good health.

In the UK around 22% of men die before the age of 65, compared to 13% of women. Although physically active men have a 20 – 30% reduced risk of premature death and 50% less chronic disease, by the age of 55-64 only 32% of men say they take the recommended half hour of exercise five times a week.

The study will also look into the psychological advantages of playing Walking Football. Recent research into older males exposed to lifelong football found they had high levels of ‘flow’ while playing football – a state of psychological reward and satisfaction. They also reported low levels of stress and exertion while playing, despite working hard. Peter hopes to see similarly positive results in his investigation.

Peter, a Reader in Psychology, said, “Football is a fantastically good way of staying fit and healthy. Studies have shown it can be effective in the treatment of mild to moderate hypertension and that it can produce high aerobic activity with marked improvements in fat oxidation and aerobic power. Most people who play the sport, at amateur and professional levels, give it up in their late 30s but there’s no reason not to enjoy the beautiful game until well into your 60s and even 70s.

Peter is currently looking for men and women over the age of 48 to participate in the study. If you are interested in taking part, please contact him on p.a.reddy@aston.ac.uk or 0121 204 4076.
News Articles
More Articles All Articles
About