News Staff
We may have Jupiter to thank for our unusual solar system.

Before the inner planets we now call  Mercury, Venus, Earth, and Mars formed, a great inward-and-then-outward journey that Jupiter made early in the solar system's history may have torn apart a number of super-Earths - planets larger than Earth but smaller than Neptune - and caused their giant remnants to fall into the sun billions of years ago.

This possible scenario has been suggested by Konstantin Batygin, a Caltech planetary scientist, and Gregory Laughlin of UC Santa Cruz in a PNAS paper.  Their simulations suggest the possibility of a new picture of the early solar system. If so, it would help to answer a number of outstanding questions about the current makeup of the solar system and of Earth itself, such as why the terrestrial planets in our solar system have such relatively low masses compared to the planets orbiting other sun-like stars. 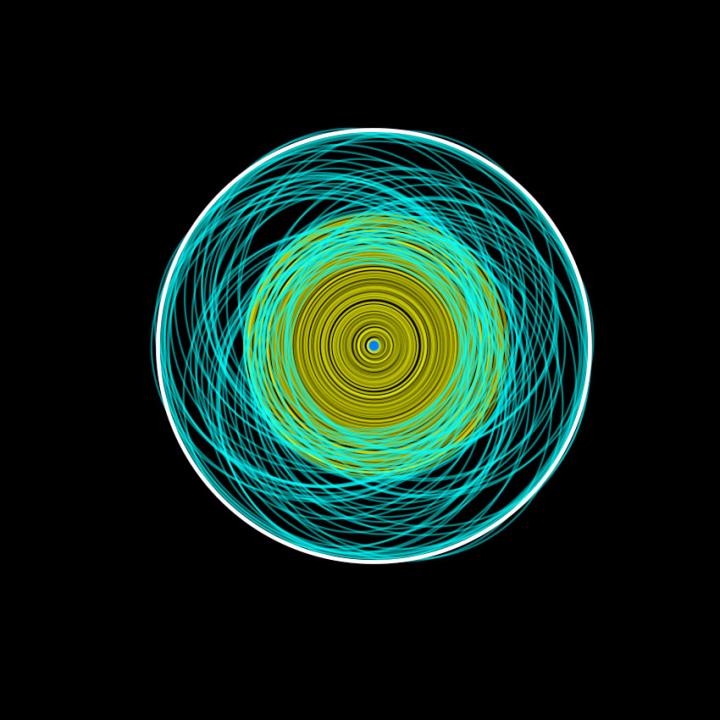 "Our work suggests that Jupiter's inward-outward migration could have destroyed a first generation of planets and set the stage for the formation of the mass-depleted terrestrial planets that our solar system has today," says Batygin, an assistant professor of planetary science. "All of this fits beautifully with other recent developments in understanding how the solar system evolved, while filling in some gaps."

Thanks to recent surveys of exoplanets--planets in solar systems other than our own--we know that about half of sun-like stars in our galactic neighborhood have orbiting planets. Yet those systems look nothing like our own. In our solar system, very little lies within Mercury's orbit; there is only a little debris--probably near-Earth asteroids that moved further inward--but certainly no planets. That is in sharp contrast with what astronomers see in most planetary systems. These systems typically have one or more planets that are substantially more massive than Earth orbiting closer to their suns than Mercury does, but very few objects at distances beyond.

"Indeed, it appears that the solar system today is not the common representative of the galactic planetary census. Instead we are something of an outlier," says Batygin. "But there is no reason to think that the dominant mode of planet formation throughout the galaxy should not have occurred here. It is more likely that subsequent changes have altered its original makeup."

According to Batygin and Laughlin, Jupiter is critical to understanding how the solar system came to be the way it is today. Their model incorporates something known as the Grand Tack scenario, which was first posed in 2001 by a group at Queen Mary University of London and subsequently revisited in 2011 by a team at the Nice Observatory. That scenario says that during the first few million years of the solar system's lifetime, when planetary bodies were still embedded in a disk of gas and dust around a relatively young sun, Jupiter became so massive and gravitationally influential that it was able to clear a gap in the disk. And as the sun pulled the disk's gas in toward itself, Jupiter also began drifting inward, as though carried on a giant conveyor belt.

"Jupiter would have continued on that belt, eventually being dumped onto the sun if not for Saturn," explains Batygin. Saturn formed after Jupiter but got pulled toward the sun at a faster rate, allowing it to catch up. Once the two massive planets got close enough, they locked into a special kind of relationship called an orbital resonance, where their orbital periods were rational--that is, expressible as a ratio of whole numbers. In a 2:1 orbital resonance, for example, Saturn would complete two orbits around the sun in the same amount of time that it took Jupiter to make a single orbit. In such a relationship, the two bodies would begin to exert a gravitational influence on one another.

"That resonance allowed the two planets to open up a mutual gap in the disk, and they started playing this game where they traded angular momentum and energy with one another, almost to a beat," says Batygin. Eventually, that back and forth would have caused all of the gas between the two worlds to be pushed out, a situation that would have reversed the planets' migration direction and sent them back outward in the solar system. (Hence, the "tack" part of the Grand Tack scenario: the planets migrate inward and then change course dramatically, something like a boat tacking around a buoy.)

In an earlier model developed by Bradley Hansen at UCLA, the terrestrial planets conveniently end up in their current orbits with their current masses under a particular set of circumstances--one in which all of the inner solar system's planetary building blocks, or planetesimals, happen to populate a narrow ring stretching from 0.7 to 1 astronomical unit (1 astronomical unit is the average distance from the sun to Earth), 10 million years after the sun's formation. According to the Grand Tack scenario, the outer edge of that ring would have been delineated by Jupiter as it moved toward the sun on its conveyor belt and cleared a gap in the disk all the way to Earth's current orbit.

But what about the inner edge? Why should the planetesimals be limited to the ring on the inside? "That point had not been addressed," says Batygin.

He says the answer could lie in primordial super-Earths. The empty hole of the inner solar system corresponds almost exactly to the orbital neighborhood where super-Earths are typically found around other stars. It is therefore reasonable to speculate that this region was cleared out in the primordial solar system by a group of first-generation planets that did not survive.

Batygin and Laughlin's calculations and simulations show that as Jupiter moved inward, it pulled all the planetesimals it encountered along the way into orbital resonances and carried them toward the sun. But as those planetesimals got closer to the sun, their orbits also became elliptical. "You cannot reduce the size of your orbit without paying a price, and that turns out to be increased ellipticity," explains Batygin. Those new, more elongated orbits caused the planetesimals, mostly on the order of 100 kilometers in radius, to sweep through previously unpenetrated regions of the disk, setting off a cascade of collisions among the debris. In fact, Batygin's calculations show that during this period, every planetesimal would have collided with another object at least once every 200 years, violently breaking them apart and sending them decaying into the sun at an increased rate.

The researchers did one final simulation to see what would happen to a population of super-Earths in the inner solar system if they were around when this cascade of collisions started. They ran the simulation on a well-known extrasolar system known as Kepler-11, which features six super-Earths with a combined mass 40 times that of Earth, orbiting a sun-like star. The result? The model predicts that the super-Earths would be shepherded into the sun by a decaying avalanche of planetesimals over a period of 20,000 years.

Batygin notes that when Jupiter tacked around, some fraction of the planetesimals it was carrying with it would have calmed back down into circular orbits. Only about 10 percent of the material Jupiter swept up would need to be left behind to account for the mass that now makes up Mercury, Venus, Earth, and Mars.

From that point, it would take millions of years for those planetesimals to clump together and eventually form the terrestrial planets--a scenario that fits nicely with measurements that suggest that Earth formed 100-200 million years after the birth of the sun. Since the primordial disk of hydrogen and helium gas would have been long gone by that time, this could also explain why Earth lacks a hydrogen atmosphere. "We formed from this volatile-depleted debris," says Batygin.

And that sets us apart in another way from the majority of exoplanets. Batygin expects that most exoplanets--which are mostly super-Earths--have substantial hydrogen atmospheres, because they formed at a point in the evolution of their planetary disk when the gas would have still been abundant. "Ultimately, what this means is that planets truly like Earth are intrinsically not very common," he says.

The paper also suggests that the formation of gas giant planets such as Jupiter and Saturn--a process that planetary scientists believe is relatively rare--plays a major role in determining whether a planetary system winds up looking something like our own or like the more typical systems with close-in super-Earths. As planet hunters identify additional systems that harbor gas giants, Batygin and Laughlin will have more data against which they can check their hypothesis--to see just how often other migrating giant planets set off collisional cascades in their planetary systems, sending primordial super-Earths into their host stars.