Wash Your Cutting Board: The Science Of How Campylobacter Exploits Chicken Juice
By News Staff | November 14th 2014 02:20 PM | Print | E-mail

Campylobacter's persistence in the kitchen is boosted by organic matter from chicken carcasses - "chicken juice" - and that means better cleaning of surfaces used for food preparation is an easy way to keep illness from happening.

Campylobacter aren't particularly hardy bacteria, so one area of research has been to understand exactly how they manage to survive outside of their usual habitat, the intestinal tract of poultry. They are sensitive to oxygen, but during biofilm formation the bacteria protect themselves with a layer of slime. This also makes them more resistant to antimicrobials and disinfection treatments.

The researchers collected liquids produced from defrosting chickens and found that this helped Campylobacter attach to surfaces and subsequently form biofilms. Biofilms are specialized structures some bacteria form on surfaces that protect them from threats from the environment. 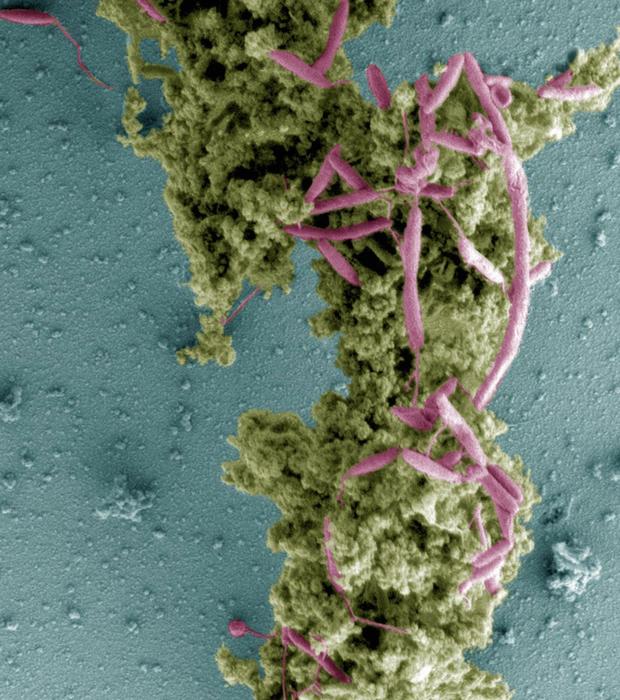 This is a false colored scanning electron microscope image of Campylobacter cells attached to chicken juice on a glass slide. Credit: Louise Salt, IFR with coloring by Kathryn Cross, IFR

"We have discovered that this increase in biofilm formation was due to chicken juice coating the surfaces we used with a protein-rich film," said Helen Brown, a PhD student at
Institute of Food Research. "This film then makes it much easier for the Campylobacter bacteria to attach to the surface, and it provides them with an additional rich food source."

Understanding this and how Campylobacter persists in the food production process will help efforts to reduce the high percentage of chickens that reach consumers contaminated with the bacteria.

Although thorough cooking kills off the bacteria, around 500,000 people suffer from Campylobacter food poisoning each year in the UK. Reducing this number, and the amount of infected chicken on supermarket shelves, is now the number one priority of the Food Standards Agency.

"This study highlights the importance of thorough cleaning of food preparation surfaces to limit the potential of bacteria to form biofilms," said Helen.