News Staff
WASP-12b, a 'hot Jupiter' (Jupiter-sized, extremely hot exoplanet) about 1.4 times the mass of Jupiter and located about 1,200 light years away from Earth, has a carbon-to-oxygen ratio greater than one, according to new measurements.

That makes WASP-12b the first-ever planetary atmosphere that is substantially enriched in carbon along with being the hottest known planet in the Milky Way galaxy.

The researchers contend this carbon-rich atmosphere supports the possibility that rocky exoplanets could be composed of pure carbon rocks like diamond or graphite rather than the silica-based rock found in Earth.

WASP-12b is largely made of gas and has no surface to host life but the first-ever finding of a carbon-rich exoplanet is significant because it introduces an entirely new class of exotic exoplanets to explore. It's also possible that rockier, Earth-sized exoplanets may have formed around the same star as WASP-12b billions of years ago. If detected, these smaller planets could also have carbon-rich atmospheres and interiors, meaning that for life to exist on these planets, it might have to survive with very little water and oxygen, and plenty of methane. 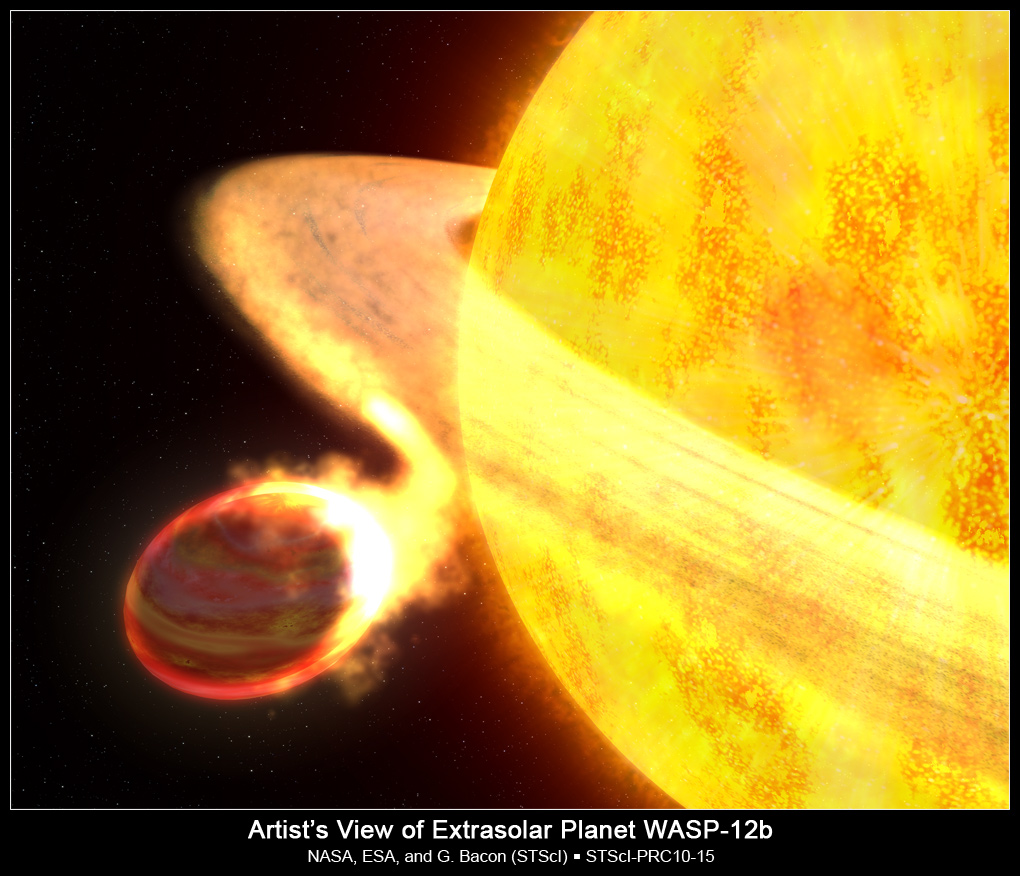 Sure, that isn't so far-fetched in light of last week's claim by NASA scientists that bacteria here can survive in arsenic, but it's still interesting.

Astronomers can figure out a planet's atmospheric composition by observing its flux, or the light emitted by the planet, at different wavelengths. The team used NASA's Spitzer Space Telescope to observe the flux from WASP-12b, at four wavelengths, right before it passed behind the star, an event known as secondary eclipse. Those observations were then combined with previously published observations, at three other wavelengths, obtained from Earth using the Canada-France-Hawaii Telescope in Hawaii.

The planet was discovered in 2009 by researchers at the United Kingdom-based consortium for Wide Angle Search for Planets (WASP), who are also coauthors of the study.

The researchers used the observations to conduct a detailed atmospheric analysis using a modeling technique he pioneered for exoplanetary atmospheres. The computer program he developed combines certain variables, such as a planet's temperature distribution, with different amounts of the most prominent molecules that exist in such atmospheres, which are methane, carbon dioxide, carbon monoxide, water vapor and ammonia, into one formula that produces a theoretical spectrum, or flux at different wavelengths. The program analyzes millions of combinations of these variables, tracking those that most closely match the flux values measured by the telescopes. Through statistical analysis of these values, they can determine the most likely composition of the atmosphere.

Based on theories about what extremely hot Jupiters such as WASP-12b should look like, assuming carbon-to-oxygen ratios of 0.5, previous models suggested that their atmospheres should have plenty of water vapor, very little methane and an atmospheric layer known as a stratosphere. Instead, the team detected an atmosphere with more than 100 times excess methane and less water than had been expected. The observed composition is consistent with a carbon-to-oxygen ratio that is greater than one. The team also discovered the lack of a strong stratosphere, which contradicts existing theories of hot Jupiter atmospheres.

The discovery suggests that chunks of rock called planetesimals that slammed together to form WASP-12b billions of years ago may have been made of carbon-rich compounds like tar — a far cry from the watery, icy planetesimals that are thought to have formed the solar-system planets. This means that if smaller exoplanets are found to have carbon-rich atmospheres, their surfaces could be covered in a tar-like substance. Future research will investigate whether life — perhaps drastically different from life as we know it — could survive in such a carbon-rich environment.

"It's exciting to even think about the possibility" of what carbon-rich planets could look like, says Adam Showman, a planetary scientist at the University of Arizona, who explains that although researchers knew that other solar systems should have a range of carbon-to-oxygen values, "this paper finally moves the discussion from pure speculation to plausible reality." He notes that exoplanets with carbon-based interiors could exhibit a range of surface features, atmospheric compositions and potential for oceans or life.