News Staff
New whale research has turned a long-accepted evolutionary assumption on its...hips. Instead of  being just vestigial, whale pelvic bones play a key role in reproduction, according to a new study.

Both whales and dolphins have pelvic (hip) bones, evolutionary remnants from when their ancestors walked on land more than 40 million years ago. Common wisdom has long held that those bones are simply vestigial, slowly withering away like tailbones have in humans. But a new paper by USC and the Natural History Museum of Los Angeles County finds that not only do those pelvic bones serve a purpose – but their size and possibly shape are influenced by the forces of sexual selection.

The muscles that control a cetacean’s penis – which has a high degree of mobility – attach directly to its pelvic bones, so to the researchers it made sense that the pelvic bones could affect the level of control over the penis that an individual cetacean has, perhaps offering an evolutionary advantage. To test their hypothesis, they examined hundreds of pelvic bones – first at the NHM, which has the second-largest collection of marine mammal specimens in North America; and then at the Smithsonian Institution, which has the largest. 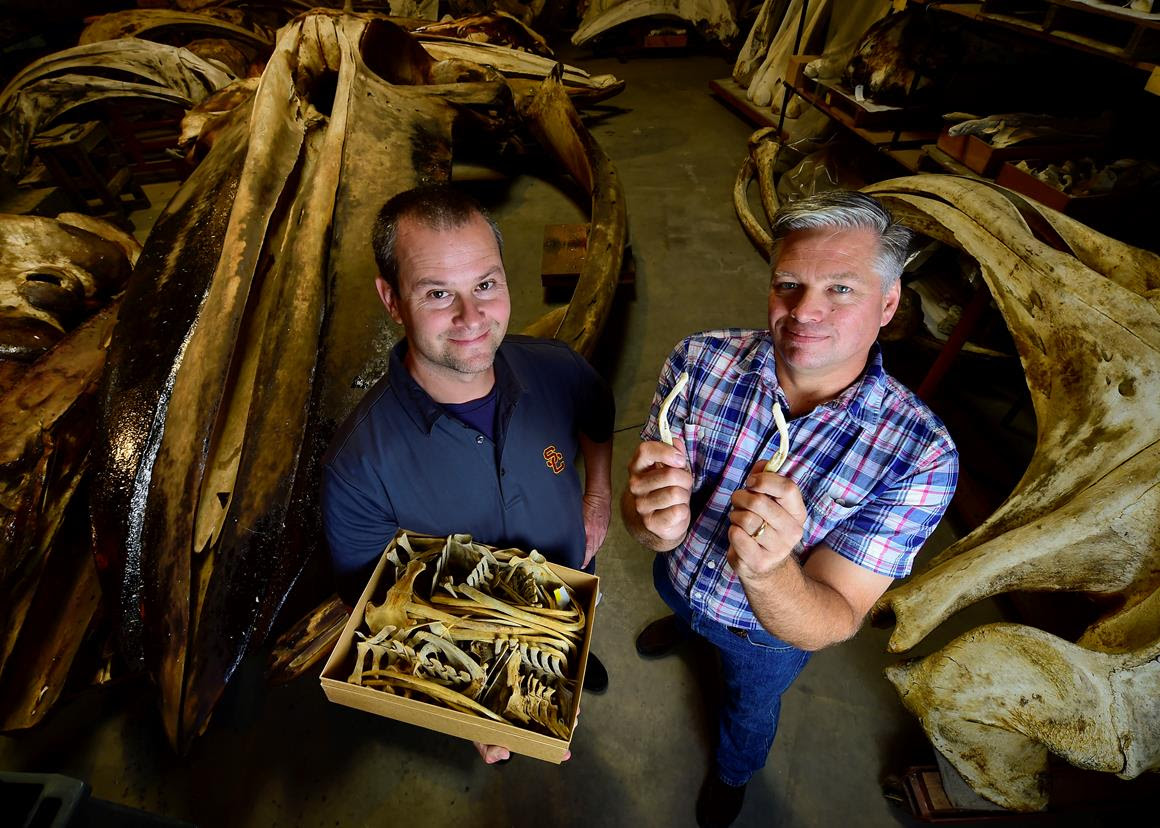 Matt Dean of USC (left) holds a box containing a dolphin skeleton and Jim Dines of NHM (right) holds up the pelvic bones. They searched through more than 10,000 boxes like this of unsorted cetacean bones for pelvic bones to study. Pelvic bones can be a hassle to collect and have long been thought to be vestigial, so often they're not collected with the rest of the skeleton. Dean and Dines found pelvic bones in only about two percent of the boxes of skeletons that they searched through. (USC Photo/Gus Ruelas)

“Everyone’s always assumed that if you gave whales and dolphins a few more million years of evolution, the pelvic bones would disappear. But it appears that’s not the case,” said Matthew Dean, assistant professor at USC..

“Cetacean skeletons are stored as boxes of bones on warehouse shelves, with each box containing an individual specimen. You have to comb through each box looking for the specific bone you need. The pelvic bones are comparatively small and aren’t always collected with the rest of the skeleton, but after the first couple hundred boxes we got very good at finding them when they were present,” said Dines, who graduated last spring from USC Dornsife’s Integrative and Evolutionary Biology program while maintaining his role at NHM.

Using a 3D laser scanner, they created digital models of the curved bones, offering an unprecedented level of detail about their shape and size, as well as giving them the option to computationally manipulate them – say, to compare two different bones.

Next, they gathered reams of data going as far back as the days of whalers about testis size relative to body mass in whales. Throughout nature, more “promiscuous” animal species – that is, those with females who mate with several males, creating a more competitive mating environment – develop larger testes relative to their body mass as a way of outperforming the competition.

As a negative control, Dean and Dines also compared testis size to the size of one of the animal’s ribs. If pelvic bone size were simply a reflection of overall skeletal size, there should be a corresponding correlation in the ribs – but there was not, strengthening the interpretation that whale pelvic bones are specifically targeted by selection related to mating system.

“Our research really changes the way we think about the evolution of whale pelvic bones in particular, but more generally about structures we call ‘vestigial.’ As a parallel, we are now learning that our appendix is actually quite important in several immune processes, not a functionally useless structure,” Dean said.

Over the course of their four-year project, the team created a new way of measuring and quantifying the complicated 3D structures of bones, using laser scanners to generate 3D images of the bones and developing novel computational methods to analyze bones that lack obvious landmarks.

The process has significant potential for the recording and study of bones by museums, Dines said.

When doing their data collection, the team had to request loans from the Smithsonian and several other museums, which would ship out the bones themselves for study. However, if all specimens were recorded using Dean and Dines’ system, digital copies could be sent anywhere in the world for free – without risking the loss or damage of the original specimen. The data that Dean and Dines collected are detailed enough to generate 3D printed versions of the bones, if desired.

“Cutting edge imaging technologies like 3D laser scanning are revolutionizing how museum collections are used. Not only do they give us a new way of analyzing bones and other specimens, they also allow us to make precise replicas of those specimens. The replicas can then, for example, be sent to colleagues abroad or placed on exhibit while the original specimen stays in the museum researcher’s lab for further study,” Dines said.

High school students are rarely listed as co-authors on peer-reviewed scientific journal articles, but Alas more than earned his place on the list, Dean said.

Currently a student at UC Irvine, Alas crossed Dean’s path by chance when, on a tour of USC with other local high schoolers, he spotted a bit of Python programming language that Dean had written on a white board for his undergraduate students. Dean said, “when I asked where he learned it, it turned out he was self-taught.”

Dean hired Alas to navigate much of the complicated computation that encoded 3D data of the pelvic bone structure.