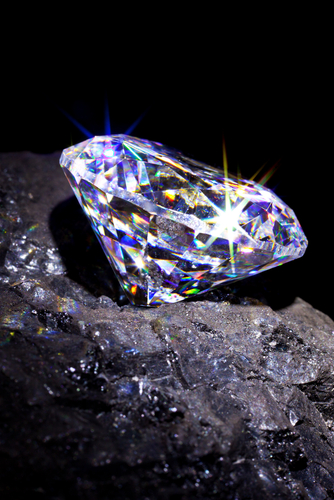 Diamonds are made of carbon, graphite is also made of carbon. Both are natural, yet one is quite valuable and the other is a commodity.

Because of basic similarities, everyone wants to know if the value and hype of diamonds are justified, especially when they see them all over mainstream department stores.

Is diamond really as rare as people make it out to be?  The short answer is yes, diamonds are incredibly rare, geologically speaking. The longer answer is that they could even be considered Mother Nature’s scientific miracle.

How did the diamond in today’s commercial deposits come to be? What do you actually need to make a diamond? Here is a basic overview of the ingredients, to appreciate the unicorns they truly are.

Chemical analysis has shown diamond crystallizing within peridotite formed at temperatures between 1000°C-1300°C, at pressures of 45-60kbar, with “deep diamonds” requiring similar temperature and pressure conditions. This combination has to exist simultaneously with a carbon source, for conception.

Twenty million years is young when we are talking about diamonds. That is the age of the youngest diamond-bearing rocks. With four isotopic systems used to determine diamond age: rhenium-osmium (Re-Os), uranium-lead (U-Pb), samarium-neodynium (Sm-Nd) and argon-argon (Ar-Ar), the genesis of diamond formation was found to be 0.9 billions of years (Ga) to 3.5 Ga. Meaning, diamonds began forming in the first quarter of the existence of the planet earth.

Volcanoes are Part of the Equation

Most diamonds are formed 150 km (90 Miles) below, within host rocks in the mantle called peridotite or eclogite, although some deep diamonds form at 150-800km within the earth. Considering the distance between the diamonds and us, the only reason we get to enjoy them at all is because they have been brought to the surface by volcanoes.

During their ascent, if there isn’t speed and a quick cool-down along the way, they likely won’t make it. Aggressive molten rock will oxidize the diamonds, leaving a poof of carbon dioxide. If everything moves too fast, high energy converts the diamonds into graphite.

How likely is a volcanic eruption? Rare, especially considering these diamond-bearing host rocks aren’t known for being in areas affected by global movement. To move up, magma needs to form within the earth and then move upwards.

The splitting of continents could cause such stress, but that doesn’t happen every day.

After the volcanic eruption happens, diamonds cool into igneous rocks, known as lamproite and kimberlite. The occurrences are few and far between, and finding them is like finding a needle in a haystack. Exploration happens in soil, sand and gravel, where prospectors search for minerals associated with diamond-bearing pipes, such as ilmenite and garnet, and proceed with bulk sampling when there is a promising find.

Diamonds can be found within their original rock, or can sometimes travel from water and erosion, being trapped in riverbeds and sand. Global production for diamond is an estimated 26 tonnes, which is small fries in the world of mining. A single mine in Zambia produces 1,000 tonnes of amethyst a year, and China produces 3,000 tons a year annually for gold alone. The majority of the 26 tonnes that is mined is also of industrial grade, and therefore not used in jewelry.

In effect, gem-quality diamond is extremely rare. This is partly why diamond recycling has grown in popularity, seen as a means of sustainability for the resource.

So before you roll your eyes at the ad campaigns that say “A Diamond is Forever,” know that it is true, and that natural diamonds are finite. The right combination of high pressure, high pressure, carbon source, volcanic eruption, smooth ascent of host rock and discovery all come into play, and have been in the process of creation long before human existence.