News Staff
Scientists have reconstructed part of the male chromosome in polar bears. They were able to assign 1.9 million base pairs specifically to the polar bear Y chromosome and show that more than 100,000 years ago, the male polar bear lineages split and developed in two separate genetic groups.

The polar bear is the world’s largest land-dwelling predator and is hard to miss. Nevertheless, it is difficult to study the evolution this arctic resident: Polar bears live and die on the frozen sea, and their remains are seldom found.

“In order to gain insights into the evolutionary development of Ursus maritimus, we use genetics instead of fossils,” explains Prof. Axel Janke of the Senckenberg Research Institute for Biodiversity and Climate in Frankfurt. 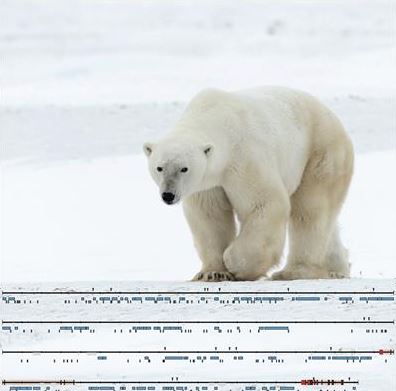 “In this age of biological revolution, it is possible to sequence the entire genome of an organism rather quickly and cost-effectively,” says Janke. However, to date, such comprehensive genome projects have mostly been limited to female animals, neglecting the males’ special chromosome – the Y chromosome. Bidon explains, “This is quite surprising, since the Y chromosome is an important part of the mammalian genome. It is the only genetic material that is passed on from male to male, thereby offering unique insights into the evolutionary history and population dynamics.”

Studying billions of small anonymous sequence segments, the Frankfurt research team has now been able to identify those puzzle-bits that are associated with the polar bear Y chromosome. Their efforts were possible by the fact that there is only one copy of the Y chromosome present in males, while females are missing it. “Using this property of the mammalian genomes and bioinformatic, we were able to identify 1.9 million base pairs in the genetic material of male polar bears,” adds Janke.

“Today, individuals from both genetic groups can be found in various Arctic regions – from Alaska to Spitsbergen,” says Bidon.

This confirms the idea that polar bears roam across vast distances and distribute their genetic material throughout the entire Arctic.