The yellow fever mosquito sustains its taste for human blood thanks to a genetic tweak that makes it more sensitive to human odor, according to a paper in Nature. They have a version of an odor-detecting gene in its antennae that is highly attuned to sulcatone, a compound prevalent in human odor.

The gene, AaegOr4, is more abundant and more sensitive in the human-preferring "domestic" form of the yellow fever mosquito than in its ancestral "forest" form that prefers the blood of non-human animals.

A comparison of domestic and forest form antennae found that two odorant-receptor genes, Or4 and Or103, are more 'expressed,' or abundant, in the human-preferring domestic mosquitoes (top bar) than in the forest form that feeds primarily on non-human animals (bottom bar). The color scale indicates the level of gene expression with purple standing for the least amount and red for the most. The numbers to the left of the colored bars represent three different colonies of each mosquito form. The slanted line under each gene's name points to the level of expression of that gene in each colony. Credit: Carolyn McBride, Department of Ecology and Evolutionary Biology and the Princeton Neuroscience Institute

The yellow fever mosquito is found in tropical and subtropical areas worldwide and is the principal carrier of yellow fever, the measles-like dengue fever, and the painful infection known as chikungunya. Yellow fever annually kills tens of thousands of people worldwide, primarily in Africa, while dengue fever infects hundreds of millions. The research also suggests a possible genetic root for human preference in other mosquitoes, such as malaria mosquitoes, although that species is genetically very different from the yellow fever mosquito.

"The more we know about the genes and compounds that help mosquitoes target us, the better chance we have of manipulating their response to our odor" McBride said, adding that scent is not the only driver of mosquito behavior, but it is a predominant factor.

In all three cases, the domestic form of the yellow fever mosquito showed a strong preference for human scent, while the forest form primarily chose the guinea pig. Although domestic mosquitoes would sometimes go for the guinea pig, it happened very rarely, McBride said. 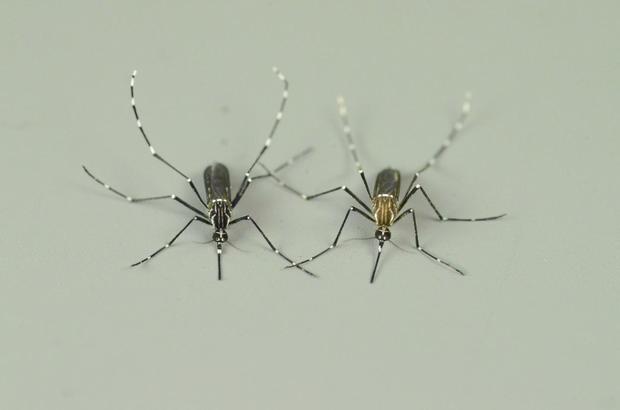 McBride and colleagues then decided to look for differences in the mosquitoes' antennae, which are equivalent to a human's nose. They interbred domestic and forest mosquitoes, then interbred their offspring to create a second hybrid generation. The genomes of these second-generation hybrids were so completely reshuffled that when the researchers compared the antennae of the human- and guinea pig-preferring individuals they expected to see only genetic differences linked directly to behavior, McBride said.

The researchers found 14 genes that differed between human- and guinea pig-preferring hybrids -- two of them were the odorant receptors Or4 and Or103. Choosing to follow up on Or4, the researchers implanted the gene into fruit-fly neurons. They found that the neurons exhibited a burst of activity when exposed to sulcatone, but no change when exposed to guinea pig odors. McBride plans to further study Or103 and other genes that could be linked to host preference at Princeton.

This work provides insight into how the domestic form of the yellow fever mosquito evolved from its animal-loving ancestor into a human-biting specialist, McBride said. "At least one of the things that happened is a retuning of the ways odors are detected by the antennae," she said. "We don't yet know whether there are also differences in how odor information is interpreted by the brain."