But inside, your dog may be more pessimistic, according to a paper from Dr. Melissa Starling of the Faculty of Veterinary Science at the University of Sydney.

Dogs were taught to associate two different sounds (two octaves apart) with whether they would get the preferred reward of milk or instead get the same amount of water. Once the dogs have learnt the discrimination task, they are presented with 'ambiguous' tones.

If dogs respond after ambiguous tones, it shows that they expect good things will happen to them, and they are called optimistic. They can show how optimistic they are by which tones they respond to. A very optimistic dog may even respond to tones that sound more like those played before water is offered. 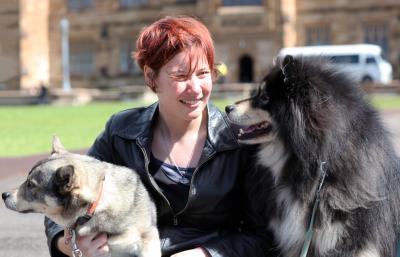 "This research is exciting because it measures positive and negative emotional states in dogs objectively and non-invasively. It offers researchers and dog owners an insight into the outlook of dogs and how that changes," said Starling. "Finding out as accurately as possible whether a particular dog is optimistic or pessimistic is particularly helpful in the context of working and service dogs and has important implications for animal welfare."

Starling believes the work means that both individuals and institutions (kennels, dog minders) can have a much more accurate insight into the emotional make-up of their dogs. According to the research a dog with an optimistic personality expects more good things to happen, and less bad things. She will take risks and gain access to rewards. She is a dog that picks herself up when things don't go her way, and tries again. Minor setbacks don't bother her.

If your dog has a pessimistic personality, he expects less good things to happen and more bad things. This may make him cautious and risk averse. He may readily give up when things don't go his way, because minor setbacks distress him. He may not be unhappy per se, but he is likely to be most content with the status quo and need some encouragement to try new things.

"Pessimistic dogs appeared to be much more stressed by failing a task than optimistic dogs. They would whine and pace and avoid repeating the task while the optimistic dogs would appear unfazed and continue," said Starling.

"This research could help working dog trainers select dogs best suited to working roles. If we knew how optimistic or pessimistic the best candidates for a working role are, we could test dogs' optimism early and identify good candidates for training for that role. A pessimistic dog that avoids risks would be better as a guide dog while an optimistic, persistent dog would be more suited to detecting drugs or explosives."

Dr Starling has been working with Assistance Dogs Australia, a charity organisation that provides service and companion dogs to people with disabilities, to investigate whether an optimism measure could aid in selecting suitable candidates for training.

The research not only suggests how personality may affect the way dogs see the world and how they behave but how positive or negative their current mood is.

"This research has the potential to completely remodel how animal welfare is assessed. If we know how optimistic or pessimistic an animal usually is, it's possible to track changes in that optimism that will indicate when it is in a more positive or negative emotional state than usual," said Dr Starling.

"The remarkable power of this is the opportunity to essentially ask a dog 'How are you feeling?' and get an answer. It could be used to monitor their welfare in any environment, to assess how effective enrichment activities might be in improving welfare, and pinpoint exactly what a dog finds emotionally distressing."