The galaxy, known as WISE J224607.57-052635.0, may have a behemoth black hole at its belly, gorging itself on gas, but is certainly the most luminous discovered to-date.

Supermassive black holes grow by drawing gas and matter into a disk around them. The disk heats up to beyond-sizzling temperatures of millions of degrees, blasting out high-energy, visible, ultraviolet, and X-ray light. The light is blocked by surrounding cocoons of dust. As the dust heats up, it radiates infrared light. 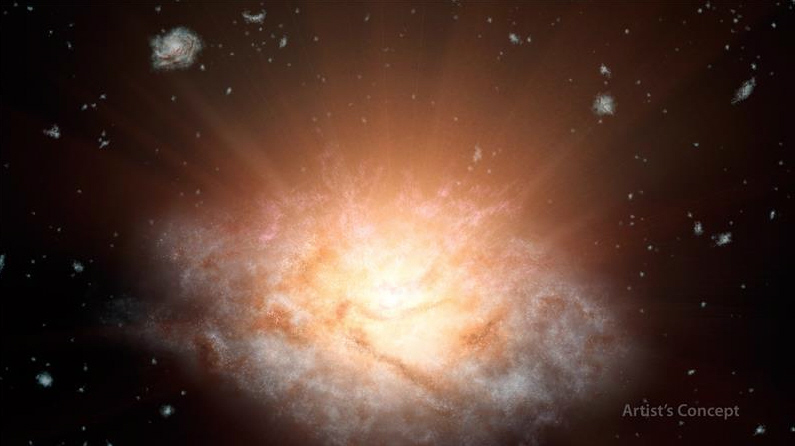 Immense black holes are common at the cores of galaxies, but finding one this big so far back in the cosmos is rare. Because light from the galaxy hosting the black hole has traveled 12.5 billion years to reach us, astronomers are seeing the object as it was in the past. The black hole was already billions of times the mass of our sun when our universe was only a tenth of its present age of 13.8 billion years.

WISE has been finding hundreds of other, similar oddball galaxies from infrared images of the entire sky it took in 2010. By viewing the whole sky with more sensitivity than ever before, WISE has been able to catch rare cosmic specimens that might have been missed otherwise. The new study reports a total of 20 new ELIRGs, including the most luminous galaxy found to date.

These galaxies, which are even more luminous than the ultraluminous infrared galaxies (ULIRGs) reported before, were not found earlier because of their distance, and because dust converts their powerful visible light into an incredible outpouring of infrared light.
News Articles
More Articles All Articles
About