There is a running joke in America that there are three times as many people in the U.S. claiming to be Irish as there are actual people in Ireland.

Though it's nice to claim to be Irish because of a last name, America is a melting pot. And it is so melted that the genetic ancestry of racial and ethnic groups varies significantly even across different geographic regions in the United States. A paper in the American Journal of Human Genetics, researchers analyzed the genomes of more than 160,000 African-Americans, Latin-Americans and European-Americans, providing insights into the subtle differences in genetic ancestry across the United States.

What did they find? People can self-identify any way they want, but genetics tells a different story, and that is because of 500 years of mixing by settlers. It isn't just the Irish or Scandinavians that have a lot of common names but less genetic similarity. Black people may not genetically have all that much in common with black people in other parts of the U.S., much less Africa. Among self-identified African-Americans nationwide, those in Georgia and South Carolina have the highest average percentage of African ancestry in the US.

And if you are in the Ku Klux Klan, you'd better not get a DNA test done. 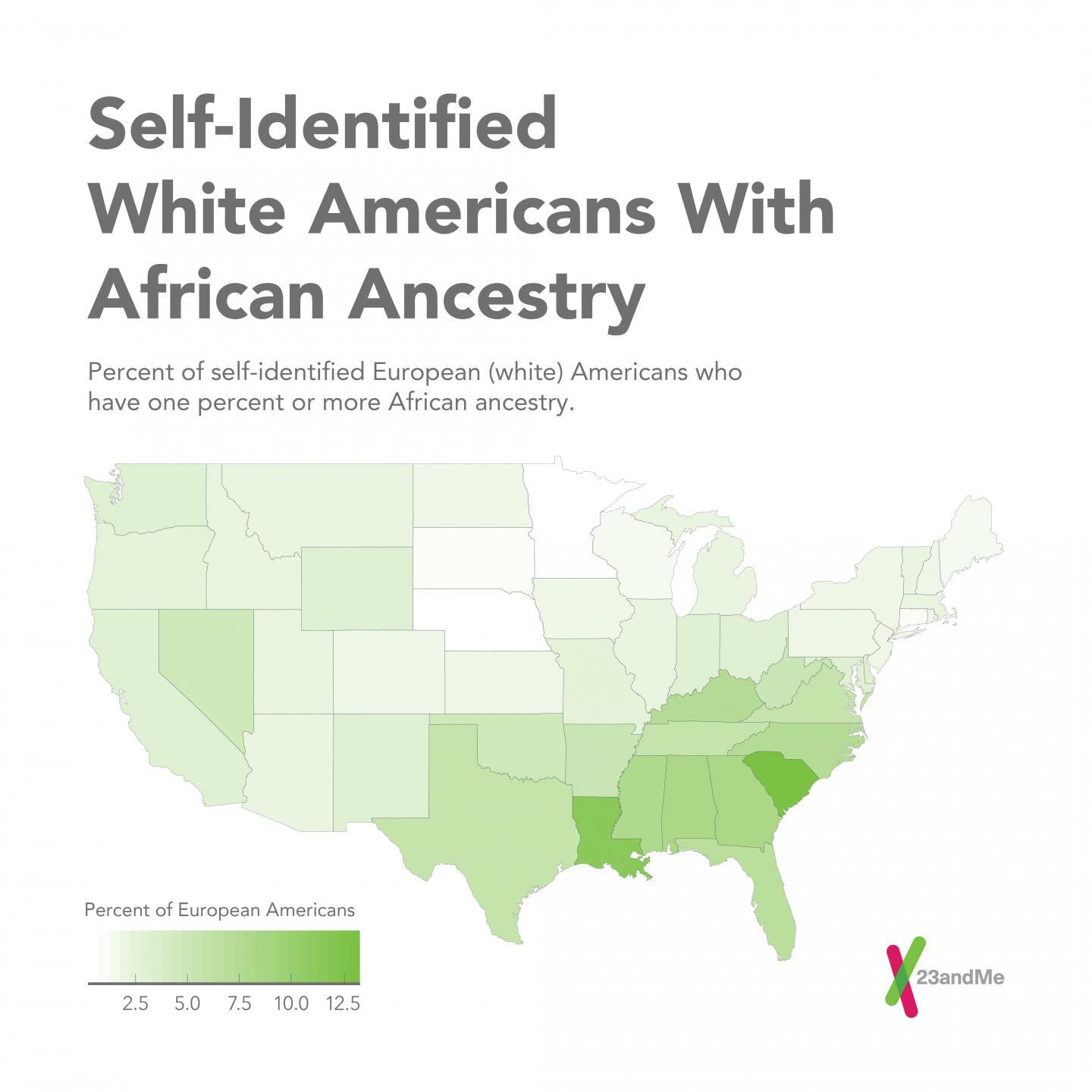 The percentage of self-identified European-Americans who have one percent or more African ancestry. Credit: 23andMe

Katarzyna Bryc of
personal genomics company
23andMe and collaborators analyzed DNA sequence variations called single-nucleotide polymorphisms in the genomes of 5,269 self-described African-Americans, 8,663 Latin-Americans, and 148,789 European-Americans. These individuals completed surveys and submitted saliva samples to
23andMe
and consented for their data to be used for research.

They found that regional ancestry differences reflect historical events such as waves of immigration. For example, Scandinavian ancestry is found in trace proportions in most states but comprises about 10% of ancestry in European-Americans living in Minnesota and the Dakotas.

They also found that individuals identify roughly with the majority of their genetic ancestry, contrary to expectations under a social "one-drop rule." Indeed, more than 6,000,000 Americans who self-identify as European descent might carry African ancestry, and as many as 5,000,000 self-described European-Americans might have at least 1% Native American ancestry.

"These findings suggest that many individuals with partial African- and Native-American ancestry have 'passed' into the white community, thereby undermining the use of cultural labels that separate individuals into discrete, non-overlapping groups," Bryc says. "Taken together, our results suggest that genetic ancestry can be leveraged to augment historical records and inform cultural processes shaping modern populations.