News Staff
Texas A&M University and the University of Texas at Austin may be former football rivals, but There's a new most distant galaxy ever found, created within 700 million years after the Big Bang.

The galaxy is z8_GND_5296. Unlike our Milky Way, which creates about 1 or 2 Sun-like stars every year or so, this newly discovered galaxy forms around 300 per year and was observed by the researchers as it was 13 billion years ago. Because the universe has been expanding the whole time, the researchers estimate the galaxy’s present distance to be roughly 30 billion light years away.

The paper is the result of raw data gleaned from a powerful Hubble Space Telescope imaging survey of the distant universe called CANDELS, or Cosmic Assembly Near-Infrared Deep Extragalactic Legacy Survey. Using that data, the team was armed with 43 potential distant galaxies and set out to confirm their distances. 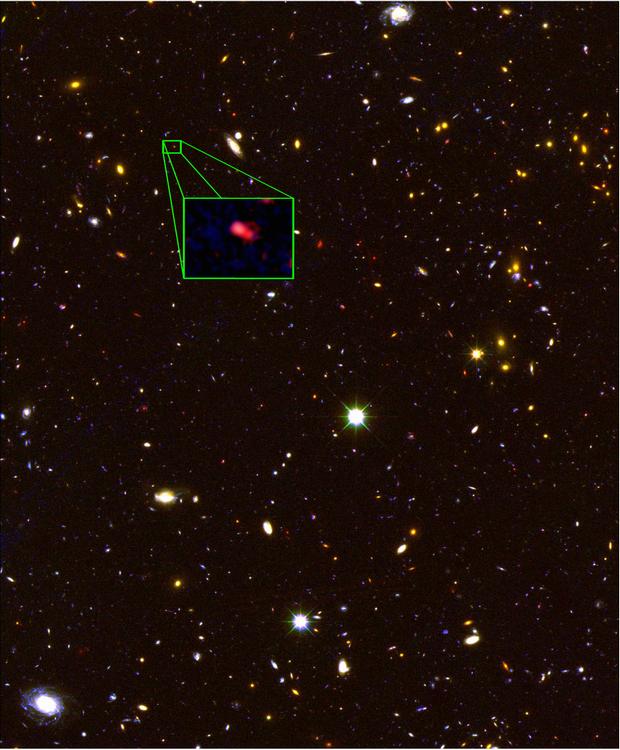 Researchers are able to accurately gauge the distances of galaxies by measuring a feature from the ubiquitous element hydrogen called the Lyman alpha transition, which emits brightly in distant galaxies. It’s detected in nearly all galaxies that are seen from a time more than one billion years from the Big Bang, but getting closer than that, the hydrogen emission line, for some reason, becomes increasingly difficult to see.

“Because of its distance we get a glimpse of conditions when the universe was only about 700 million years old — only 5 percent of its current age of 13.8 billion years,” said Texas A&M astrophysicist Casey Papovich, co-author of the paper in Nature.

Vithal Tilvi, a Texas A&M postdoctoral research associate and co-author of the paper notes this is one of two major changes in the fundamental essence of the universe since its beginning — the other being a transition from a plasma state to a neutral state. He is leading the effort on a follow-up paper that will use a sophisticated statistical analysis to explore that transition further.

“Everything seems to have changed since then,” Tilvi said. “If it was neutral everywhere today, the night sky that we see wouldn’t be as beautiful. What I’m working on is studying exactly why and exactly where this happened. Was this transition sudden, or was it gradual?”

Tilvi, graduate student Mimi Song and Steven Finkelstein, an assistant professor at the University of Texas at Austin and 2011 Hubble Fellow, were at the W.M. Keck Observatory on Mauna Kea in April and detected one galaxy during their two nights of observation at Keck, which turned out to be the most distant ever confirmed. It was at a redshift 7.51 —  which means it was created about 13 billion years ago. Because the universe is expanding, the space between galaxies also is increasing. And as objects move away, they become redder. In essence, the higher the redshift, the farther away the object.

Only five other galaxies have ever been confirmed to have a redshift greater than 7, with the previous high being 7.215.

Finkelstein credits technological advancements in recent years for allowing astronomers to probe deeper into space and closer to the Big Bang. For instance, a powerful new spectrometer called MOSFIRE (Multi-Object Spectrometer For Infra-Red Exploration) that is 25 times more light-sensitive than others of its kind was installed at Keck in 2012.

And the Hubble Space Telescope is powered by a new near-infrared camera installed by astronauts aboard the Space Shuttle in 2009 that sees farther into the universe.