Cellular reproduction seems simple but the ability to faithfully copy genetic material and distribute it equally to daughter cells is fundamental to all forms of life - and complex. Even seemingly simple single-celled organisms must have the means to meticulously duplicate their DNA, carefully separate the newly copied genetic material, and delicately divide in two to ensure their offspring survive.

In eukaryotic cells such as those in plants and animals, an elaborate molecular circuitry coordinates duplication and separation of genetic material with division, much as the control knob on a washing machine coordinates agitation, rinsing and spinning. And the cellular control system, like the washing machine control system, has sensors that detect anomalies and shut things down if something is wrong.

What about bacteria? Writing in Current Biology, Heidi A. Arjes, a doctoral student in the lab of Petra Levin, PhD, associate professor of biology in Arts&Sciences at Washington University in St. Louis, presents the first experimental data that show there are at least two fail-safe points in the bacterial cell cycle that tie DNA replication to cell division. 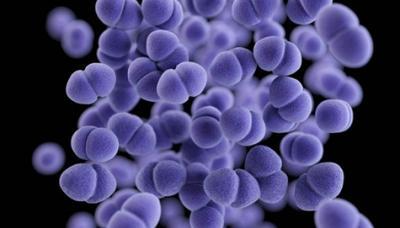 Methicillin-resistant Staphylococcus aureus (MRSA) bacteria dividing. Under nutrient-rich conditions bacteria go into hyper-drive, dividing as often as once every 20 minutes. The discovery of fail-safe points in their cell cycles may provide a way to shut down rampant proliferation. Credit: Centers for Disease Control and Prevention

A cell that stumbles at either division or DNA replication can repair itself and re-enter the cell cycle. But if it does not do so quickly, the fail-safes are activated, forcing the cell to exit the cell cycle forever. It then enters a zombie-like state and is unable to reproduce even under the most favorable of conditions.

When nutrients are scarce, bacteria grow slowly, working through the cell cycle step-by-step. In nutrient rich conditions, however, bacteria take advantage of the situation to multiply as rapidly as possible, overlapping two of the steps: cell division and DNA replication—something that never happens in eukaryotic cells.

Because of their ability to overlap these two essential processes, bacteria have been thought to lack the fail-safe mechanisms that ensure stepwise progression through reproduction in eukaryotic cells.

Understanding the mechanisms of bacterial cell-cycle control may have major payoffs for medicine. Drugs that shut down the cell cycle could be used to fight bacterial infections. Not only would they prevent bacteria from multiplying, they would prevent them from passing on resistance genes or recovering once the drug had been metabolized.

The bacterial cell cycle begins when a newborn daughter cell elongates and begins to make another copy of its DNA. As DNA replication proceeds, a division ring, called the Z-ring, starts to assemble at mid-cell. The Z-ring recruits other molecules to form a contractile ring and, once there are at least two complete copies of the DNA, pinches the bacterial cell in two to form daughter cells.

So far the bacterial cell cycle isn't all that different from the eukaryotic cell cycle. But when bacteria find themselves in nutrient-rich conditions, they shift into high gear, doubling in size and dividing as often as once every 20 minutes. Since it takes a bacterium 40 minutes to completely copy its DNA, how can it divide once every 20 minutes?

To make everything come out right, bacteria employ "multifork replication": they initiate new rounds of DNA copying before the first round finishes. Getting a head start on DNA replication ensures at least one set of genetic material will be ready before they divide. Only the most mature DNA round must be complete before the cell divides. The other replication forks will finish in subsequent generations.

It was this overlap between replication and division that led to the traditional view that the bacterial cell cycle consists of parallel processes that are only loosely linked.

It was common sense that the processes had to be connected somehow, Levin said. After all, bacteria wait until one set of chromosomes is complete to divide. Dividing across incomplete or mingled DNA is usually lethal. "But until Heidi's data, people spoke of the bacterial cell cycle as somehow magically coordinated even though there was no mechanism for doing so. Things just somehow worked out fine even though no control system had been identified."

What is the benefit of terminal arrest in a single-celled organism, whose main goal in life is to divide?

"It might actually be a form of altruism," Arjes said. "In nature, bacteria often exist not in isolation, but in communities. An aged or unhealthy cell that removed itself from the population would benefit the community as a whole because it would no longer compete for nutrients or produce defective daughter cells." Although the research firmly establishes the existence of two fail-safe points in the bacterial cell cycle, the mechanisms that ensure proper cell-cycle progression are still a mystery.

Heidi Arjes of Washington University in St. Louis explains how the failsafes in the bacterial cell cycle work. A bacterium that fails to pass either failsafe enters a zombified state of suspended animation. Credit: Heidi Arjes)

These signaling pathways will be great targets for new antibiotic therapies. Drugs that drove bacteria past the point of no return would prevent them from proliferating, stalling an infection. Blocking DNA replication would prevent bacteria from sharing mutations that confer antibiotic resistance. "Most importantly," says Arjes, "if a bacterium has encountered a terminal cell-cycle arrest, it cannot recover even after the drug has been metabolized."

"People are already working on drugs that hit the division machinery," said Arjes. "They've done a lot of screens; in fact in our experiments we used a new drug called PC190723 that blocks division in Staphylococcus aureus. It was synthesized for us by Jared Shaw, a chemist at the University of California at Davis, and is being tested against MRSA (methicillin-resistant Staphylococcus aureus) isolates.

"Combination therapy with PC190723 and other drugs such as methicillin, an extended-spectrum penicillin antibiotic, appear to be effective against MRSA even though methicillin alone is no longer effective. The division blocker somehow sensitizes the bacteria to drugs to which they have become resistant."

The eukaryotic cell cycle has been studied for more than a century. Three scientists won the Nobel Prize for Physiology and Medicine in 2001 for figuring out the regulators that prevent the cell from dividing promiscuously and endlessly. It's even possible to play a cell cycle control game at the Nobel site, Nobelprize.org.