As the giant North American ice sheets melted an enormous pool of freshwater, many times larger than all of the Great Lakes, formed behind them. About 8400 years ago this pool of freshwater burst free and flooded the North Atlantic.

About the same time, a sharp century long cold spell is observed around the North Atlantic and other areas. Researchers have often speculated that the cooling was the result of changes in ocean circulation triggered by this freshwater flood. The sudden addition of so much freshwater would have curtailed (suppressed) the sinking of deep water in the North Atlantic and as a consequence less warm water would be pulled north in the Gulf stream. 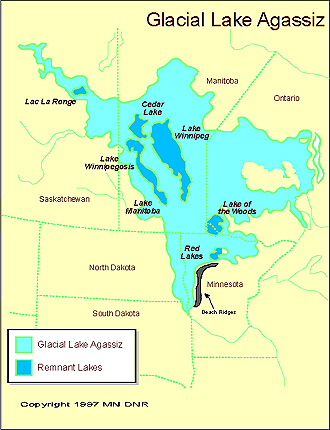 There is no modern or future equivalent source for freshwater to cause a mega flood like that which occurred 8400 years ago. Yet, the fact that these deep ocean changes clearly occur on timescales rapidly enough to impact human societies underscores the importance of determining just how much freshwater is needed to bring about such dramatic changes, given the concerns that melting of the Greenland Ice Sheet may accelerate as the globe warms.

In a new study in Science, Helga (Kikki) Flesche Kleiven and co-workers confirm that the deep ocean was disturbed in the way described above. Using a marine core from south of Greenland, which monitors the southward flowing deep waters formed in the North Atlantic they show that there is a sudden disruption in the deep circulation pattern at the time of the flood outburst. Just at the time of the flood, the chemical properties of the deep ocean shift suddenly to values not observed at any other time in the last 10,000 years. The chemical changes suggest that at the site south of Greenland, the new deep waters formed in the North were completely replaced by older deepwater coming from the south.

This suggests that deep waters from the North Atlantic were too shallow or weak to influence this site for about century following the flood outburst after which time the deep ocean snapped back to its near modern state. This is what researchers had predicted and what computers have simulated the ocean needed to have done in order to help bring about the cold spell.

Kleiven et al., strengthen the connection between the deep ocean changes and the climate anomaly by showing that the sharp cooling at their location falls within the century long disruption in deep circulation.

If the cooling had fallen outside the period of disrupted circulation, the role of the ocean and related heat transport could have been ruled out as the major driver of the cooling.

Perhaps even more importantly, they show that deep circulation is altered over just a few decades or less demonstrating that the the deep ocean changes fast enough to drive the sudden jump in climate seen at this and other times in the past.