Most people wouldn’t consider anthrax toxin to be beneficial, but this bacterial poison may someday be an effective cancer therapy. Anthrax toxin has actually been shown to be fairly selective in targeting melanoma cells, although the risk of non-cancer toxicity prevents any clinical use.

To develop a better and safer treatment, Stephen Leppla and colleagues created a mutated antrax toxin that could only be turned on by matrix metalloproteinases (MMP), proteins that are overproduced only in cancer cells.

When they tested this mutated toxin in mice, the researchers observed that 100% of the animals tolerated a dose that would be lethal for the natural toxin. The MMP-toxin was also better at killing melanoma tumors than natural toxin, due to its higher specificity and longer half-life in the blood. 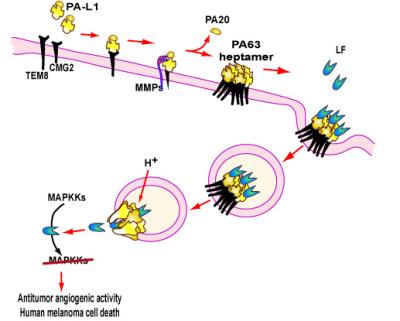 After binding to cell surface markers, the MMP-activated PA protein (PA-L1) is cleaved by surface associated MMPs, releasing the PA20 fragment. The remaining receptor-bound fragment rapidly oligomerizes to form a heptamer. Up to three molecules of anthrax lethal factor (LF) bind to the heptamer, which is then internalized. Once inside the cell, the complex encounters an acidic environment, which induces a conformational change and allows the LF to enter the cytosol. LF released into the cytosol shuts down multiple signaling pathways, leading to inhibition of tumor angiogenesis and human melanoma cell death. Credit: The image was created by Drs. Shihui Liu, Mahtab Moayeri, and Stephen H. Leppla.

Even better, Leppla and colleagues saw that MMP-toxin was not limited to melanoma, and could also kill other tumors like colon and lung. This more widespread activity was due to the toxin’s ability to inhibit angiogenesis, or the formation of new blood vessels.

These encouraging mouse results suggest that modified anthrax toxin could be clinically viable, and this potent killer might someday be put to good use.