Applied scientists at the Harvard School of Engineering and Applied Sciences (SEAS) in collaboration with researchers from Hamamatsu Photonics in Hamamatsu City, Japan, have demonstrated, for the first time, lasers in which the direction of oscillation of the emitted radiation, known as polarization, can be designed and controlled at will. The innovation opens the door to a wide range of applications in photonics and communications. Harvard University has filed a broad patent on the invention.

Spearheaded by graduate student Nanfang Yu and Federico Capasso, Robert L. Wallace Professor of Applied Physics and Vinton Hayes Senior Research Fellow in Electrical Engineering, both of SEAS, and by a team at Hamamatsu Photonics headed by Dr. Hirofumi Kan, General Manager of the Laser Group, the findings were a cover feature of the April 13 issue of Applied Physics Letters.

"Polarization is one of the key features defining a laser beam. Controlling it represents an important new step towards beam engineering of lasers with unprecedented flexibility, tailored for specific applications," explains Capasso. "The novelty of our approach is that instead of being conducted externally, which requires bulky and expensive optical components, manipulation of the beam polarization is achieved by directly integrating the polarizer on the laser facet. This compact solution is applicable to semiconductor lasers and other solid-state lasers, all the way from communication wavelengths to the mid-infrared and Terahertz spectrum". 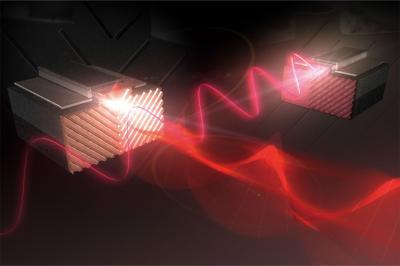 Animation of the demonstration of a laser in which the direction of oscillation of the emitted radiation, known as polarization, can be designed and controlled at will. Photo Credit: Laboratory of Federico Cappaso, Harvard School of Engineering and Applied Sciences

To achieve the results, the researchers sculpted a metallic structure, dubbed a plasmonic polarizer directly on the facet of a quantum cascade (QC) laser. The QC laser emitted at a wavelength of ten microns (in the invisible part of the spectrum known as the mid-infrared where the atmosphere is transparent). The team was able to control the state of polarization by generating both linearly polarized light along an arbitrary direction and circularly polarized light. 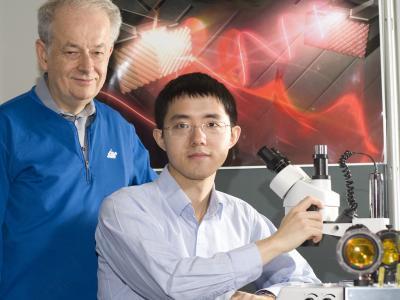