News Staff
COROT has found the smallest terrestrial planet ever detected outside the Solar System. The amazing planet is less than twice the size of Earth and orbits a Sun-like star. Its temperature is so high that it is possibly covered in lava or water vapour.

About 330 exoplanets have been discovered so far, most of which are gas giants with characteristics similar to Jupiter and Neptune.   The new find, COROT-Exo-7b, is different: its diameter is less than twice that of Earth and it orbits its star once every 20 hours. It is located very close to its parent star, and has a high temperature, between 1000 and 1500°C. Astronomers detected the new planet as it transited its parent star, dimming the light from the star as it passed in front of it.

The density of the planet is still under investigation: it may be rocky like Earth and covered in liquid lava. It may also belong to a class of planets that are thought to be made up of water and rock in almost equal amounts. Given the high temperatures measured, the planet would be a very hot and humid place. 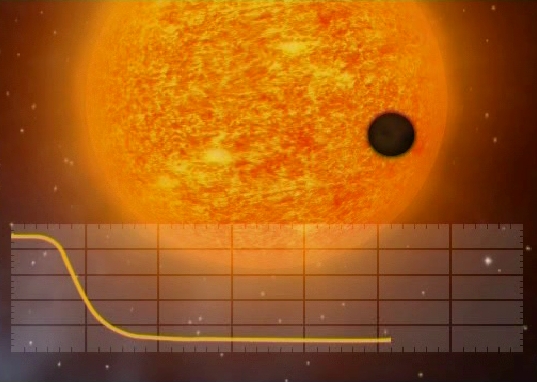 One of the methods for detecting exoplanets is to look for the drop in brightness they cause when they pass in front of their parent star. Such a celestial alignment is known as a planetary transit.   From Earth, both Mercury and Venus occasionally pass across the front of the Sun. When they do, they look like tiny black dots passing across the bright surface.   Such transits block a tiny fraction of the light that COROT is able to detect.   Credits: CNES

Very few exoplanets found so far have a mass comparable to Earth’s and the other terrestrial planets: Venus, Mars, and Mercury. This is because terrestrial planets are extremely difficult to detect. Most of the methods used so far are indirect and sensitive to the mass of the planet, while COROT can directly measure the size of its surface, which is an advantage. In addition, its location in space allows for longer periods of uninterrupted observation than from ground.

This discovery is significant because recent measurements have indicated the existence of planets of small masses but their size remained undetermined until now.

The internal structure of COROT-exo-7b particularly puzzles scientists; they are unsure whether it is an ‘ocean planet’, a kind of planet whose existence has never been proved so far. In theory, such planets would initially be covered partially in ice and they would later drift towards their star, with the ice melting to cover it in liquid.

“Finding such a small planet was not a complete surprise”, said Daniel Rouan, researcher at the Observatoire de Paris Lesia, who coordinates the project with Alain Léger, from Institut d’Astrophysique Spatiale (Paris, France). “COROT-Exo-7b belongs to a class of objects whose existence had been predicted for some time. COROT was designed precisely in the hope of discovering some of these objects,” he added.

COROT (planetary convection, rotation and transits) is a mission led by the French Space Agency (CNES), with contributions from ESA, Austria, Belgium, Germany, Spain and Brazil. It is a telescope placed in Earth orbit that was launched in December 2006 carrying a 27 cm-diameter telescope designed to detect tiny changes the brightness of nearby stars. The mission’s main objectives are to search for exoplanets and to study stellar interiors.

"This discovery is a very important step on the road to understanding the formation and evolution of our planet," said Malcolm Fridlund, ESA’s COROT Project Scientist. “For the first time, we have unambiguously detected a planet that is 'rocky' in the same sense as our own Earth. We now have to understand this object further to put it into context, and continue our search for smaller, more Earth-like objects with COROT," he added.

This discovery benefited from complementary observations made thanks to an extensive European telescope network operated by various institutes and countries. The European Southern Observatory at Paranal and La Silla (Chile), the 80-cm telescope at the Canary Islands Astrophysics Institute, and the Canada-France-Hawaii Telescope on Mauna Kea, Hawaii (CNRS, CNRC, and University of Hawaii).