A close binary system of two candidate black holes in the quasar OJ 287 has shown Einstein some physics love. A central black hole, with a mass equal to 18 billion times that of the Sun, is orbited by a smaller one, and the interaction of the system with its surroundings produces brightness changes that allow astronomers to study the evolution of the orbit.

This evolution is dominated by one of the most intriguing predictions of Einstein's General Theory of Relativity: the emission of gravitational waves.

Astronomers believe that very massive black holes lurk at the centers of most galaxies but, as in the case of our own Galaxy, they often remain silent and are difficult to detect. In other cases where the black holes are surrounded by disks of material that fall onto them (accretion disks), the infalling material is heated and emits huge quantities of radiation: the active nucleus of a galaxy can appear, then, as a quasar. 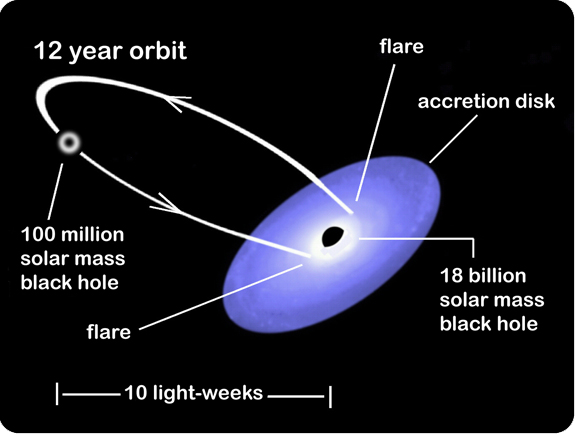 One such quasar is OJ 287, the center of a galaxy 3.5 billion light-years away in the constellation of Cancer. This object exhibits the peculiarity of sending quasi-periodic pulses of energy every twelve years with two outburst peaks per interval. A study in Nature confirms one of the suspected interpretations for this behavior: this quasar is powered by a binary black hole.

The research group, led by Dr. Mauri Valtonen of University of Turku, Finland, has analyzed the behavior of this system. Timing the brightness changes over many years, they have been able to plot the orbit of the small black hole and this provides a precise way to measure the big hole: 18 billion solar masses. They have also followed the evolution of the orbit and checked that its size and orientation change accordingly to the predictions of Einstein's General Theory of Relativity.

Previous tests of Einstein's General Theory of Relativity have been carried out in weak gravitational fields but this study clearly shows an example of gravitational waves at work, one of the most exotic predictions of Einstein's theory. Effectively, the binary black hole orbit shrinks and evolves in a way that can only be explained if it is losing huge quantities of energy in the form of gravitational radiation.

The observations leading to this discovery have been done thanks to the joint collaboration of a number of observatories at Japan, China, Turkey, Greece, Finland, Poland, Great Britain and Spain. More than 25 astronomers from 10 countries took part in the campaign.

Two points deserve a special mention: first, that all the telescopes involved are considered "small" apertures (only two of them were close to 2.5 m in diameter), and second, that a number of key participants were amateur astronomers who operate their own telescopes.

Calar Alto observatory participated in the observational campaigns with its 2.2 m telescope, equipped with the instrument CAFOS, to perform photometric and polarimetric observations. The polarimetric data were crucial to confirm the conclusions of the study, as stated in the paper published in Nature, and only two of the participant observatories provided this kind of data.

The model of the binary black hole developed by Valtonen and collaborators predicts a new outburst of OJ 287 quasar in 2016. No doubt many telescopes will be looking to Cancer around the predicted dates of that year.