Superconductors are materials that conduct electrical currents without any loss below a certain temperature. Normally, high magnetic fields destroy superconductivity, turning the material into a normal conductor.

Prof. Peter Fulde from the Max Planck Institute for the Physics of Complex Systems in Dresden and Prof. Richard Ferrell predicted the existence of this special superconducting state in 1964, characterized by a spatial modulation of the superconductivity. At about the same time, two further researchers independently predicted the same phase. Therefore, the state is called Fulde-Ferrell-Larkin-Ovchinnikov (FFLO) state. 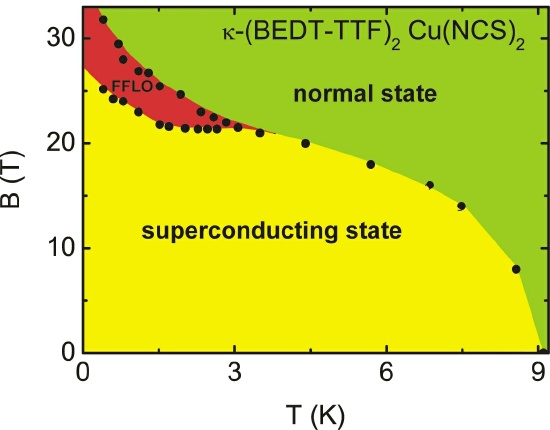 Phase diagram of the organic superconductor k-(BEDT-TTF)2Cu(NCS)2. At low temperatures the Fulde-Ferrell-Larkin-Ovchinnikov-Phase (FFLO) occurs. In the diagram it is visible as interspace between the blue and the red curve.

Superconductors have no electrical resistance at low temperatures. They are, for example, applied for magnet coils in magnetic resonance scanners or in particle accelerators. Each superconducting material becomes a normal conductor in the presence of a certain magnetic field.

Due to this hybrid state, the superconductivity can also survive in very high magnetic fields. This state appears in stacked materials that consist of ultra-thin conducting and insulating layers.

The first successful experiments on an organic superconductor were performed in static magnetic fields at the Grenoble High Magnetic Field Laboratory in 2007. This material was expected to become a normal conductor at about 22 Tesla (Tesla is the unit for the magnetic flux density and a measure for the strength of the magnetic field) but if the magnetic field is applied parallel to the organic molecule layers the superconductivity survives in much higher fields due to the formation of the hybrid phase.

Recently, a second series of experiments was completed. The hybrid phase was investigated with another method in more detail and also at lower temperatures. It was possible to observe superconductivity on that material in high magnetic fields up to 32 Tesla.