New research challenges the generally accepted belief that substantial ice sheets could not have existed on Earth during past super-warm climate events.

The study by researchers at Scripps Institution of Oceanography at UC San Diego provides strong evidence that a glacial ice cap, about half the size of the modern day glacial ice sheet, existed 91 million years ago during a period of intense global warming. 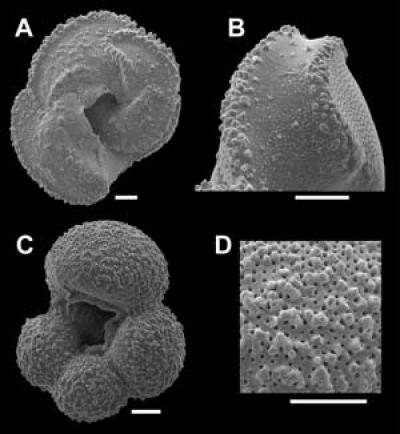 Using two independent isotopic techniques, researchers at Scripps Oceanography studied the microfossils to gather geochemical data on the growth and eventual melting of large Cretaceous ice sheets. The researchers compared stable isotopes of oxygen molecules (d18O) in bottom-dwelling and near-surface marine microfossils, known as foraminifera, to show that changes in ocean chemistry were consistent with the growth of an ice sheet. The second method in which an ocean surface temperature record was subtracted from the stable isotope record of surface ocean microfossils yielded the same conclusion.

These independent methods provided Andre Bornemann, lead author of the study, with strong evidence to conclude that an ice sheet about 50-60 percent the size of the modern Antarctic ice cap existed for about 200,000 years. Bornemann conducted this study as a postdoctoral researcher at Scripps Oceanography and continues this research at Universitat Leipzig in Germany.

“Until now it was generally accepted that there were no large glaciers on the poles prior to the development of the Antarctic ice sheet about 33 million years ago,” said Richard Norris, professor of paleobiology at Scripps Oceanography and co-author of the study. “This study demonstrates that even the super-warm climates of the Cretaceous Thermal Maximum were not warm enough to prevent ice growth.”

Researchers are still unclear as to where such a large mass of ice could have existed in the Cretaceous or how ice growth could have started. The authors suggest that climate cycles may have favored ice growth during a few times in the Cretaceous when natural climate variations produced unusually cool summers. Likewise, high mountains under the modern Antarctic ice cap could have been potential sites for growth of large ice masses during the Cretaceous.

Ice sheets were much less common during the Cretaceous Thermal Maximum than during more recent “icehouse” climates. Paradoxically, past greenhouse climates may have aided ice growth by increasing the amount of moisture in the atmosphere and creating more winter snowfall at high elevations and high latitudes, according to the paper’s authors.

The results from the study are consistent with other studies from Russia and New Jersey that show sea level fell by about 25-40 m (82-131 ft) at the same time that the ice sheets were growing during the Cretaceous period. Sea level is known to fall as water is removed from the oceans to build continental ice sheets; conversely, sea level rises as ice melts and returns to the sea.

Sea cliff at Tilleul Beach on the coast of Normandy, France are rich in microfossils and of the same age as the marine chalks used in the study to understand Earth's climate history. Credit: Scripps Institution of Oceanography, UC San Diego

The presence or absence of sea ice has major environmental implications, specifically in terms of sea level rise and global circulation patterns. As humans continue to add large amounts of carbon dioxide and other greenhouse gases that accelerate the heating of the atmosphere and oceans, research on Earth’s past climate conditions is critical to predict what will happen as Earth’s climate continues to warm.

This research study was supported by the German Research Foundation and the National Science Foundation under the management of the Joint Oceanographic Institutions.