When tumor cells acquire the capacity to move around and invade other tissues, there is a risk of metastases and cancer treatment becomes more difficult.

At the Institut Curie, CNRS Director of Research Philippe Chavrier and his group have just discovered how breast cancer cells break the bonds that tether them to the tumor. The basement membrane around the mammary gland is a barrier to the spread of cancer cells. Three proteins in the tumor cells transport enzymes needed to perforate this barrier, and another protein puts these enzymes in the right place. 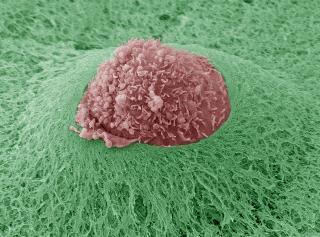 Attempted cell escape This scanning electron microscope images shows breast tumor cell (pink) on a thick layer of Matrigel (green), which mimics the basement membrane separating the body’s tissues. This highly invasive cell penetrates the Matrigel layer and “escapes” in a process similar to that of the invasion by tumor cells. In the cell on the right. Image credits: Renaud Poincloux & Philippe Chavrier/CNRS/Institut Curie Thanks to the Ultrastructural Microscopy Group of the Institut Pasteur (Head: Marie-Christine Prévost)

Tissues are generally formed by cells arranged side by side. Epithelial cells cover an outer surface, such as the skin or an organ such as the mammary gland, and remain tightly bound together. This cohesion is vital to the body’s functioning, and the epithelial cells remain in position in their original tissue until they die. Sometimes, though, they detach and move away, and while such migration is essential during embryonic development as cells give rise to new tissues, when tumor cells break loose this often heralds the formation of metastases.

Tumor cells accumulate errors, become totally anarchic, and flout all the rules. Some even become detached from the tumor through complex and poorly understood mechanisms. The Membrane and Cytoskeleton Dynamics Group headed by Philippe Chavrier(1) (UMR 144 CNRS/Institut Curie) has now shed new light on the way cells, in this case breast cancer cells, escape their shackles. The mammary gland is separated from the neighboring tissue by the basement membrane, which the tumor cells will have to cross before continuing on their way.

In a first publication, the researchers used a model of metastatic breast cancer cells to show that the proteins sec3, sec8 and IQGAP1 transport vesicles containing proteases to the invadopodia. Without sec3, sec8 and IQGAP1 the vesicles cannot be fastened to the ends of the invadopodia and so the cells fail to escape into the neighboring tissue. Before the proteases can degrade the membrane, they must first be released from the vesicles.

In a second publication, Philippe Chavrier and colleagues show that the protein Vamp7 fuses protease-containing vesicles with the membrane of tumor cells. Only then can the proteases at the ends of the invadopodia progressively erode the basement membrane of the mammary gland. Inactivation of Vamp7 greatly reduces the ability of the breast cancer cells to degrade the extracellular matrix.

Attempted cell escape This scanning electron microscope images shows breast tumor cell (pink) on a thick layer of Matrigel (green), which mimics the basement membrane separating the body’s tissues. In this cell, the proteases that degrade the proteins of the basement membrane have been inhibited. The cell is therefore no longer able to degrade the basement membrane (Matrigel) and so cannot escape. Image credits: Renaud Poincloux & Philippe Chavrier/CNRS/Institut Curie Thanks to the Ultrastructural Microscopy Group of the Institut Pasteur (Head: Marie-Christine Prévost).

So tumor cells can only escape from the mammary gland by accomplishing a whole series of modifications. Philippe Chavrier and his group have shown how they hijack cellular mechanisms to leave their original tissue, after which they can spread throughout the body and form metastases.

These discoveries may help to explain why certain breast cancers are more aggressive than others, or even to identify highly invasive tumors at an early stage. It is also conceivable that tumor invasion could be blocked by acting on the underlying mechanisms identified by Philippe Chavrier and colleagues.