News Staff
Astronomers have taken snapshots of a multi-planet solar system much like ours orbiting another star, for the first time.

The new solar system orbits a dusty young star named HR 8799, which is 140 light years away and about 1.5 times the size of our sun. Three planets, roughly 10, 10 and 7 times the mass of Jupiter, orbit the star. The size of the planets decreases with distance from the parent star, much like the giant planets do in our system.

And there may be more planets out there, but scientists say they just haven't seen them yet. 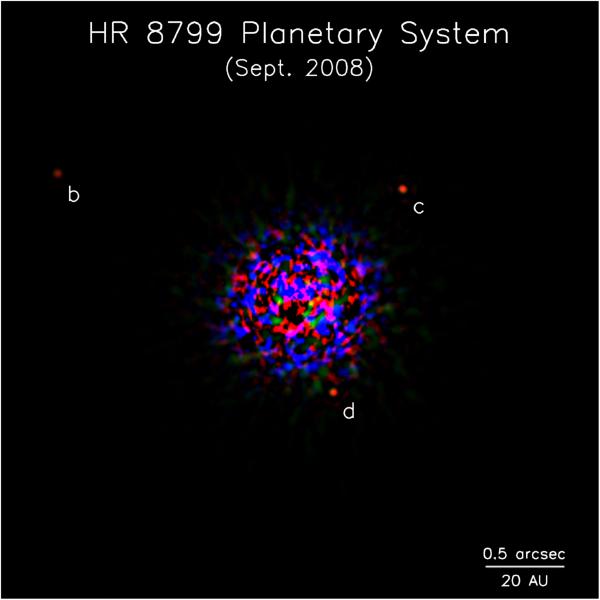 HR 8799. Near-infrared false-color image taken with the W.M. Keck II telescope and adaptive optics. The three planets are labelled b, c, and d. The colored speckles in the center are the remains of the bright light from their parent star after image processing.

"Every extrasolar planet detected so far has been a wobble on a graph. These are the first pictures of an entire system," said Bruce Macintosh, an astrophysicist from Lawrence Livermore National Laboratory and one of the key authors of a paper appearing in the Nov. 13 issue of Science Express. "We've been trying to image planets for eight years with no luck and now we have pictures of three planets at once."

Using high-contrast, near-infrared adaptive optics observations with the Keck and Gemini telescopes, the team of researchers from Livermore, the NRC Herzberg Institute of Astrophysics in Canada, Lowell Observatory, University of California Los Angeles, and several other institutions were able to see three orbiting planetary companions to HR 8799.

Astronomers have known for a decade through indirect techniques that the sun was not the only star with orbiting planets.

"But we finally have an actual image of an entire system," Macintosh said. "This is a milestone in the search and characterization of planetary systems around stars."

During the past 10 years, various planet detection techniques have been used to find more than 200 exoplanets. But these methods all have limitations. Most infer the existence of a planet through its influence on the star that it orbits, but don't actually tell scientists anything about the planet other than its mass and orbit. Second, the techniques are all limited to small to moderate planet-star separation, usually less than about 5 astronomical units (one AU is the average distance from the sun to Earth).

In the new findings, the planets are 24, 37 and 67 times the Earth-sun separation from the host star. The furthest planet in the new system orbits just inside a disk of dusty debris, similar to that produced by the comets of the Kuiper belt of our solar system (just beyond the orbit of Neptune at 30 times Earth-sun distance).

"HR8799's dust disk stands out as one of the most massive in orbit around any star within 300 light years of Earth" said UCLA'S Ben Zuckerman.

In some ways, this planetary system seems to be a scaled-up version of our solar system orbiting a larger and brighter star, Macintosch said.

The host star is known as a bright, blue A-type star. These types of stars are usually ignored in ground and space-based direct imaging surveys since they offer a less favorable contrast between a bright star and a faint planet. But they do have an advantage over our sun: Early in their life, they can retain heavy disks of planet-making material and therefore form more massive planets at wider separations that are easier to detect. In the recent study, the star also is young - less than 100 million years old - which means its planets are still glowing with heat from their formation.

"Seeing these planets directly - separating their light from the star - lets us study them as individuals, and use spectroscopy to study their properties, like temperature or composition," Macintosh said.

The planets have been extensively studied using adaptive optics on the giant Keck and Gemini telescopes on Mauna Kea, Hawaii. Adaptive optics enables astronomers to minimize the blurring effects of the Earth's atmosphere, producing images with unprecedented detail and resolution. LLNL helped build the original adaptive optics system for Keck, the world's largest optical telescope. Christian Marois, a former LLNL postdoctoral researcher and the primary author of the paper who now works at NRC, developed an advanced computer processing technique that helps to extract the planets from the vastly brighter light of the star.

A team led by Macintosh is constructing a much more advanced adaptive optics system designed from the beginning to block the light of bright stars and reveal even fainter planets. Known as the Gemini Planet Imager (http://gpi.berkeley.edu), this new system will be up to 100 times more sensitive than current instruments and able to image planets similar to our own Jupiter around nearby stars.

"I think there's a very high probability that there are more planets in the system that we can't detect yet," Macintosh said. "One of the things that distinguishes this system from most of the extrasolar planets that are already known is that HR8799 has its giant planets in the outer parts - like our solar system does - and so has 'room' for smaller terrestrial planets - far beyond our current ability to see - in the inner parts."
News Articles
More Articles All Articles
About