A collaboration of over 50 astronomers, The IPHAS consortium, led from the UK, with partners in Europe, USA, Australia, has released today (10th December 2007) the first comprehensive optical digital survey of our own Milky Way. Conducted by looking at light emitted by hydrogen ions, using the Isaac Newton Telescope on La Palma, the survey contains stunning red images of nebulae and stars. The data is described in a paper submitted to the Monthly Notices of the Royal Astronomical Society.

To date, the IPHAS survey includes some 200 million unique objects in the newly released catalogue. This immense resource will foster studies that can be at once both comprehensive and subtle, of the stellar demographics of the Milky Way and of its three-dimensional structure. 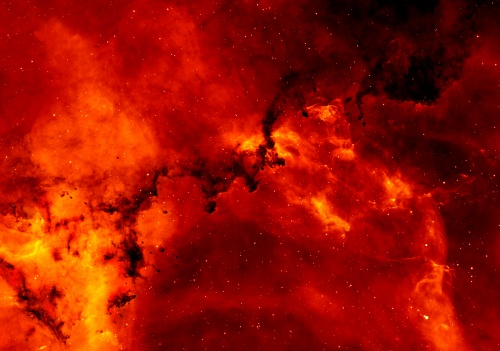 This is an image of the centre of the Rosette Nebula, as imaged in Hydrogen alpha emission in the IPHAS survey. The centre of this HII region, where the exciting star cluster (NGC 2244) is located, lies at the middle-bottom of this image (N is to the left, and E down). The longer dimension in this image is approximately 30 arcminutes. (credits: Nick Wright, University College London) Image taken using the Isaac Newton Telescope.

Professor Janet Drew of the University of Hertfordshire said “Using the distinctive Hydrogen marker we are able to look at some of the least understood stars in the Galaxy – those at the early and very late stages of their life cycles. These represent less than one in a thousand stars, so the IPHAS data will greatly improve our picture of stellar evolution.”

IPHAS is embracing a recent change in the way astronomers share data. As well as being available through traditional web access it is also being published through a Virtual Observatory interface, where it can automatically be cross-referenced with other relevant data catalogues.

Dr Nic Walton of the University of Cambridge said “Using the standard Virtual Observatory interface is a very effective way of exploiting the IPHAS survey data. This is a substantial and significant survey, which aims to eventually contain 7-800 million objects. Access through the AstroGrid Virtual Observatory opens up a full range of analysis options and should allow astronomers to make greater use of the information. IPHAS is the largest dataset published primarily through Virtual Observatory interfaces to date, and as such heralds the future of survey data mining.”

This initial data release is of observations of the Northern Plane of the Milky Way (the star filled section) that cover 1600 sq deg, in two broadband colours, and a narrow band filter sensitive to the emission of Hydrogen in the red part of the spectrum (H-alpha emission). The image resolution is high enough to permit the detection of individual stars exhibiting H-alpha emission, in addition to the diffuse gas that makes up the often-beautiful glowing nebulae that lower spatial resolution surveys have made known to us before.

The IPHAS database is already revealing a wealth of new science. For example, IPHAS team members from the University of Southampton, have led an effort to extract and catalogue the brighter H-alpha emission line stars revealed so far by the survey. This list of nearly 5000 objects is already the longest single list of its kind. The distribution of these special objects, across the northern sky, traces 'hot spots' of recently formed stars in our Galaxy much more convincingly than has been possible hitherto.

The IPHAS survey will eventually be extended to cover the entire galactic plane of our galaxy, with a coverage approaching 4000 square degrees (for comparison, the moon on the sky as seen from Earth covers ~0.1 square degrees).