A silent, ultra-thin, low-power and low maintenance cooling system for laptop computers and other electronic devices has been developed based on silent air purifier techniques.

The compact, solid-state fan is the most powerful and energy efficient fan of its size. It produces three times the flow rate of a typical small mechanical fan and is one-fourth the size.

Dan Schlitz and Vishal Singhal of Thorrn Micro Technologies, Inc., of Marietta, Ga. will present their RSD5 solid-state fan at the 24th Annual Semiconductor Thermal Measurement, Modeling and Management Symposium (Semi-Therm) in San Jose, Calif., on March 17, 2008. The device is the culmination of six years of research that began while the researchers were NSF-supported graduate students at Purdue University. 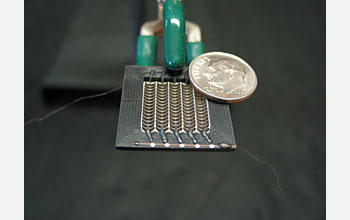 Researchers have developed a new micro-fan only slightly larger than a dime. The new fan can generate winds on the same scale as a laptop computer fan, but uses far less energy and should require far less maintenance. Credit: Dan Schlitz and Vishal Singhal, Thorrn Micro Technologies

"The RSD5 is one of the most significant advancements in electronics cooling since heat pipes. It could change the cooling paradigm for mobile electronics," said Singhal.

The RSD5 incorporates a series of live wires that generate a micro-scale plasma (an ion-rich gas that has free electrons that conduct electricity). The wires lie within un-charged conducting plates that are contoured into half-cylindrical shape to partially envelop the wires.

Within the intense electric field that results, ions push neutral air molecules from the wire to the plate, generating a wind. The phenomenon is called corona wind.

"The technology is a breakthrough in the design and development of semiconductors as it brings an elegant and cost effective solution to the heating problems that have plagued the industry," said Juan Figueroa, the NSF SBIR program officer who oversaw the research.

With the breakthrough of the contoured surface, the researchers were able to control the micro-scale discharge to produce maximum airflow without risk of sparks or electrical arcing. As a result, the new device yields a breeze as swift as 2.4 meters per second, as compared to airflows of 0.7 to 1.7 meters per second from larger, mechanical fans.

The contoured platform is a part of the device heat sink, a trick that enabled Schlitz and Singhal to both eliminate some of the device's bulk and increase the effectiveness of the airflow.

"The technology has the power to cool a 25-watt chip with a device smaller than 1 cubic-cm and can someday be integrated into silicon to make self-cooling chips," said Schlitz.

This device is also more dust-tolerant than predecessors. While dust attraction is ideal for living-room-scale fans that that provide both air flow and filtration, debris can be a devastating obstacle when the goal is to cool an electrical component.

A prior press release on an earlier iteration of this research is available at: http://www.nsf.gov/news/news_summ.jsp?cntn_id=100354