Researchers at Eindhoven University of Technology (TU/e) have developed an entirely new method for starting chemical reactions. For the first time they used mechanical forces to control catalytic activity – one of the most fundamental concepts in chemistry. This allowed them to initiate chemical reactions with mechanical force. This discovery paves the way to developing materials capable of repairing themselves under the influence of mechanical tension. The results of their research were published in Nature Chemistry.

The research team (Dr. Alessio Piermattei, Dr. Karthik Sivasubramanian and Dr. Rint Sijbesma) of the Institute for Complex Molecular Systems (ICMS) and the Department of Chemical Engineering and Chemistry, both at TU/e, is the first to have demonstrated that a catalyst can be switched from a dormant to an active state (see illustration) by pulling on a polymer chain, a "molecular ripcord." The researchers were able to use this catalyst to initiate a variety of chemical reactions, including polymerizations (formation of polymer chains from small molecular building blocks called monomers).

This discovery paves the way to creating self-repairing materials that strengthen under the influence of mechanical stress. If a material were to tear, for example, this would simultaneously break the metal complex in half, thereby activating the catalyst, and the material would be instantly repaired. 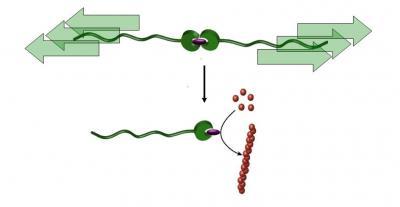 A catalyst can be switched from a dormant to an active state by pulling on a polymer chain, a "molecular ripcord".  Photo Credit: Rint Sijbesma

This work will also lead to research into other applications in which it should be possible to turn chemical reactions on and off as desired. Potential applications include the injection molding of plastic objects, where the technique could be used to simplify processing, or microscale chemical synthesis.

How does it work; weakest link

The researchers packed a catalytically active metal ion completely in using two molecular caps (ligands). They attached two polymer chains to these caps, creating a long chain with a metal complex in the center. These complexes were dissolved in a liquid that was irradiated with ultrasound, causing bubbles to form in the liquid. When these bubbles imploded, they created an extremely strong current that stretched the chains and ultimately broke its weakest link – the metal complex – in two. The cap on one end was now broken off from the active metal ion, which allowed the metal ion to become catalytically active.

In other words, it could now accelerate chemical reactions.