NASA and Ad Astra Rocket Company of Webster, Texas, have signed a Space Act Agreement that could lead to the testing of their new plasma-based space propulsion technology, the VASIMR engine, on the International Space Station. The engine initially was studied by NASA and is being commercially developed by Ad Astra.

This is the first such agreement for a payload on the station’s exterior and represents an expansion of NASA’s plans to operate the U.S. portion of the space station as a national laboratory. This effort follows the success achieved by the agency last year in reaching multiple agreements to utilize internal station sites for this endeavor. 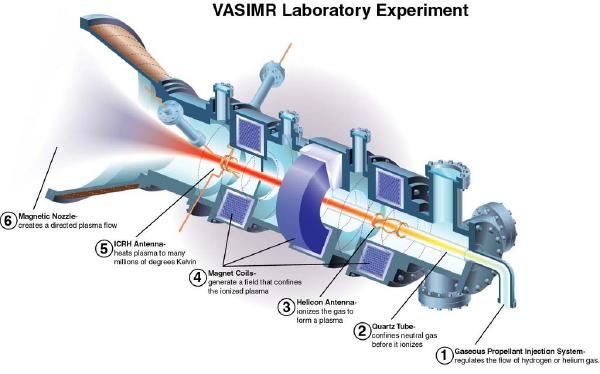 "Ad Astra's Space Act Agreement with NASA offers an example of just the kind of research and technology development that we should be doing on the International Space Station, can do there, and cannot easily do anywhere else," NASA Administrator Michael Griffin said. "Dr. Chang-Diaz's VASIMR engine concept has long held great theoretical promise for future high-efficiency space propulsion. With this agreement, we are taking the first steps down the road to its practical realization. I am grateful to the teams on both sides who have worked to develop a plan that yields a near-term step forward for both Ad Astra and NASA on this exciting prospect."

NASA's Associate Administrator for Space Operations William Gerstenmaier and Ad Astra's President and Chief Executive Officer Franklin Chang Diaz signed the agreement on Dec. 8. The agreement is structured in a series of "gates," designed to allow the parties to assess milestones on an incremental basis while proceeding to flight. Upon the achievement of these milestones, NASA and Ad Astra envision that VASIMR will be launched to the station and be tested, for the first time, in the vacuum of space.

The VASIMR project will pave the way in demonstrating a new class of larger, more complex science and technology payloads to be installed on the station's exterior. Smaller projects already have been started for installation inside the station as part of the effort to use the U.S. portion of the station as a national laboratory. NASA hopes the agreement with Ad Astra will encourage other entities, governmental and commercial, to pursue similar projects and to facilitate the success of those projects by providing a model for implementation.

Chang-Diaz, a former astronaut and veteran of seven space shuttle flights is a plasma physicist. In 2001, the American Institute of Aeronautics and Astronautics awarded him the Wyld Propulsion Award for his 21 years of research on the VASIMR engine.
News Articles
More Articles All Articles
About