Researchers at Low Temperature Laboratory and Laboratory of Physics (TKK) and at University of Stony Brook (New York) have potentially solved the problem of accurately defining the ampere. The group has developed a frequency to current converter, the accuracy of which is based on the known charge of an electron and the extreme accuracy in defining frequency. The nanodevice is essentially a single electron transistor which works as a simple single-electron turnstile. Its best performance is achieved at very low temperatures.

Previously, the electric current and its unit, the ampere, have been defined through the classical force induced to two parallel leads carrying the current. In the past years, many proposals and experiments have been put forward to achieve a relatively simple and accurate high-yield current source. No satisfying device has been implemented yet. 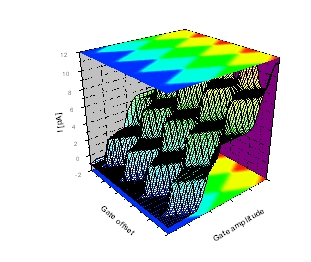 ”The goal of our research has been to develop a reliable frequency to current converter since the frequency can be fixed with ultra high accuracy. It was interesting to observe that in this more than two decades old field, there is still room for simple inventions”, says professor Jukka Pekola, the leader of the PICO group at Low Temperature Laboratory.

In the experiments carried out at TKK in Micronova, the method was observed to work so well (see the figure) that the device can be regarded as one of the most potential candidates to realize a metrological current pump.

This device, which may revolutionize quantum metrology, works as follows: The turnstile is biased to a fixed dc voltage and its island is capacitively coupled to a sinusoidal gate voltage with frequency f. Thus the dc off-set and the amplitude of the gate drive determine exactly the number, n, of electrons passed through the device in each cycle, and hence the electric current. In this case, the current is defined to be nef, where e is the electron charge.

”At the moment, our work is focused on eliminating the remaining errors using advanced designs of the device and active error correction schemes”, tells Jukka Pekola with optimism.

The research is closely related to the so-called quantum metrological triangle experiment, in which the fundamental constants of nature e and h (Planck’s constant) are checked for consistency using the quantum standards of electric voltage, current, and resistance. These kinds of experiments are pursued in a couple of laboratories world wide, for example, at Otaniemi campus in the Center for Metrology and Accreditation in collaboration with Low Temperature Laboratory and VTT.