Dr Adrian Bowyer, a senior lecturer in engineering in the Faculty of Engineering & Design at the University of Bath, has created RepRap, an open source prototype machine that has succeeded in making a duplicate of itself - by printing its own parts and building a clone.

RepRap has, so far, been capable of making every day plastic goods such as door handles, sandals and coat hooks. Now, the machine has also succeeded in copying all its own 3D-printed parts. 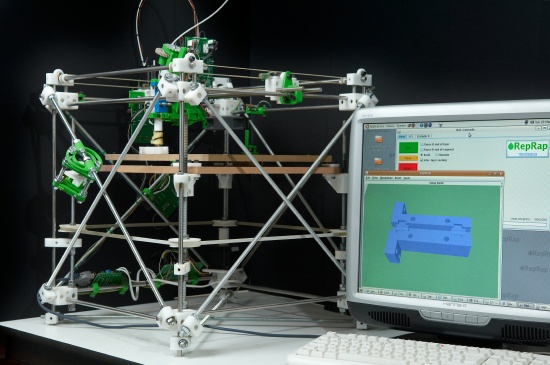 These parts have been printed and assembled by RepRap team member Vik Olliver in Auckland, New Zealand, into a new RepRap machine that can replicate the same set of parts for yet another RepRap machine and so on ad infinitum. While 3D printers have been available commercially for about 25 years, RepRap is the first that can essentially print itself.

The machine will be exhibited publicly at the Cheltenham Science Festival (4-8 June 2008).

Dr Bowyer said: “These days, most people in the developed world run a professional-quality print works, photographic lab and CD-pressing plant in their own house, all courtesy of their home PC. Why shouldn't they also run their own desktop factory capable of making many of the things they presently buy in shops, too?

“The possibilities are endless. Now, people can make exactly what they want. If the design of an existing object does not quite suit their needs, they can easily redesign it on their PC and print that out, instead of making do with a mass-produced second-best design from the shops. They can also print out extra RepRap printers to give to their friends. Then those friends can make what they want too.”

Recently, Chris DiBona, Open Source Programs Manage at Google Inc, encouraged people to: "Think of RepRap as a China on your desktop."

Sir James Dyson, Chief Executive of the Dyson Group, said: “RepRap is a different, revolutionary way of approaching invention. It could allow people to change the ergonomics of a design to their own specific needs.”

Dr Bowyer hopes people will come to the Cheltenham Science Festival and see both the 'parent' and the 'child' RepRap machines in action for the first time together.

Adrian Bowyer (left) and Vik Olliver (right) with a parent RepRap machine, made on a conventional rapid prototyper, and the first complete working child RepRap machine, made by the RepRap on the left. The child machine made its first successful grandchild part at 14:00 hours UTC on 29 May 2008 at Bath University in the UK, a few minutes after it was assembled.

"RepRap is the most enjoyable research project I've ever run," he said. "And without the many talented and selfless volunteers the RepRap project has all round the world, it would have never succeeded so quickly."

Complete plans for the prototype RepRap 3D printer and detailed tutorials to aid motivated amateurs (and professionals) in assembling one are available to everyone free at the RepRap website (details below). The materials, plus the minority of parts that the machine cannot print, cost about £300. All those non-printed parts can be bought at hardware shops or from online stores.

Adrian and several of the other Reprap team members will be available to answer questions and exhibit the parent and child Darwin printers in operation at the Cheltenham Science Festival on 4 – 8 June 2008.