The STONE-6 experiment tested whether sedimentary rock samples could withstand the extreme conditions during a descent though the Earth’s atmosphere where temperatures reached at least 1700 degrees Celsius. After landing, the samples were transported in protective holders to a laboratory clean-room at ESTEC and examined to see if any traces of life remained. The results were presented by Dr Frances Westall at the European Planetary Science Congress on September 25th. 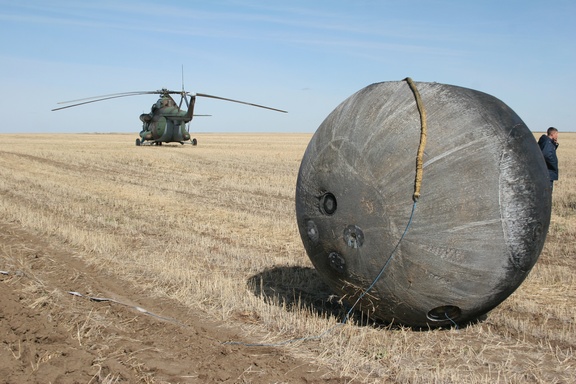 The Foton-M3 capsule immediately after landing. The STONE-6 rock samples were fixed in the circular positions at the left side of the capsule.

In 1999, ESA created the first artificial meteorite experiment in space, STONE-1, which tested the effects of entry into the Earth’s atmosphere on samples of igneous and sedimentary rock as well as a simulated sample of martian regolith. Since then, further STONE experiments have tested the effects on different rock types and biological traces. During descent, the re-entry capsule reaches a velocity of 7.6 kilometres per second, slightly lower than normal meteorite velocities of 12-15 kilometres per second.

Recent missions have gathered compelling evidence for water and sediments on early Mars. Potential traces of Martian life are more likely to be found in sediments that have been formed in water. However, although about 39 known meteorites from Mars have been identified, all are basaltic rock-types and no sedimentary meteorites have been found to date.

Dr Westall said, “The STONE-6 experiment shows that sedimentary martian meteorites could reach Earth. The fact that we haven’t found any to date could mean that we need to change the way we hunt for meteorites. Most meteorites have been found in Antarctica, where their black fusion crust shows up clearly against the white snow. In this experiment we found that the sedimentary rocks developed a white crust or none at all. That means that we need to expand our search to white or light-coloured rocks.”

The STONE-6 experiment was mounted on a FOTON M3 capsule that was launched from Baikonur on 14th September 2007. Two samples of terrestrial sedimentary rock and a control sample of basalt were fixed to the heat-shield of the return capsule, which re-entered the atmosphere on 26th September after 12 days in orbit. The basalt was lost during re-entry. However, a sample of 3.5 billion year old volcanic sand containing carbonaceous microfossils and a 370 million year sample of mudstone from the Orkney Islands containing chemical biomarkers both survived.

On examination at ESTEC, the 3.5 billion year old sample of sand from Pilbara in Australia was found to have formed a half-millimetre thick fusion crust that was creamy white in colour. About half the rock had ablated but the microfossils and carbon survived at depth in the sample. Approximately 30 percent of the other sediment, a lacustrine sand from the Orkney Islands, also survived, as did some of the biomolecules. The heat of entry resulted in mineralogical changes in both rocks.

The rocks also transported living organisms, a type of bacteria called Chroococcidiopsis, on the back of the rocks, away from the exposed edge. Unfortunately the heat of reentry was so high, even with a protective two centimetre-thick rock coating, that the organisms were carbonised. They died but their cells still remain as “pompeified” forms.

Dr Westall said, “The STONE-6 experiment suggests that, if martian sedimentary meteorites carry traces of past life, these traces could be safely transported to Earth. However, the results are more problematic when applied to Panspermia, a theory that proposes living cells could be transported between planets. STONE-6 showed at least two centimetres of rock is not sufficient to protect the organisms during entry.”