If you're a Muslim and you're worried that debating your NCAA March Madness championship tie-breaker scenarios at work will cause you to miss a prayer time ... well, okay, you're not doing that because designing technological devices for religious use is very different from designing devices for other uses, like the office, where everyone talks about sports.

"Efficiency and productivity tend to be driving forces when designing technology for offices, but these are not as central when designing applications for the home or religious settings. Why would you design a device that makes someone pray faster?," said Wyche.

Wyche, along with her research team, chose to focus on Islam for this study, partially because of the religion's popularity worldwide and partially because Muslims have historically used technology such as compasses and telescopes to help them determine the direction to face during prayer.

Working with seven focus groups, they determined that the greatest interest from the participants lay in prompting them when it was time to pray — not by using text, which some commercial applications use, but through imagery combined with audible alerts.

Sun Dial tells users that the time to pray is approaching by using an image of the sun lining up with a green circle. When the sun lines up with the circle, it's time to pray. 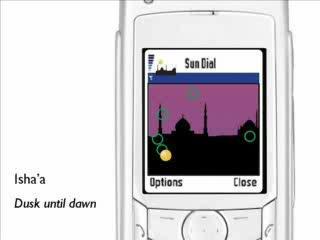 Sun Dial is a mobile phone application that alerts Muslims when it's time for one of their five daily prayers.

"Unlike similar systems, ours relies on graphics rather than text and graphs to communicate prayer times. Users drove this choice by telling us that tracking the sun was the most religiously valued method to determine prayer times."

Wyche and colleagues tested their application with Muslims from Georgia Tech and the greater Atlanta area for two weeks with favorable reaction. They're currently working on implementing a few design changes such as a digital clock and a vibration alert. Eventually, they plan on making the application available for download.

"Sun Dial provided more than functionality or a prompt to the prayer times; it also contributed to users' religious experience by reminding them they were part of a larger community. More broadly, carefully considering imagery is important when developing mobile phone applications, particularly ones that support personal and emotional activities, which may be sacred or secular." 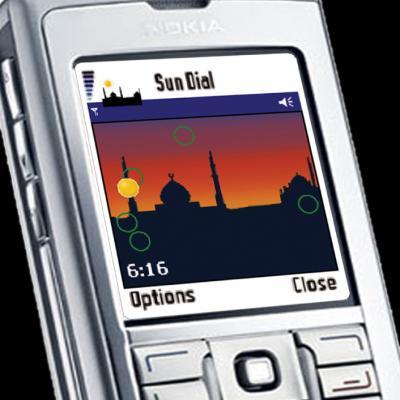 Sun Dial is a mobile application that uses images to alert users to the five daily prayers of Islam.
(Photo Credit: Susan Wyche)