Since robots live in a binary world, it is difficult to program them in a way where they can understand the nuances and inflections of human speech among many different people.

A team of researchers from the Georgia Institute of Technology and Emory University may have made that unnecessary. They can instruct a robot to find and deliver things using something more direct than speech - a laser pointer.

El-E (pronounced like the name Ellie), a robot designed to help users with limited mobility with everyday tasks, autonomously moves to an item selected with a green laser pointer, picks up the item and then delivers it to the user, another person or a selected location such as a table. El-E, named for her ability to elevate her arm and for the arm's resemblance to an elephant trunk, can grasp and deliver several types of household items including towels, pill bottles and telephones from floors or tables.

To ensure that El-E will someday be ready to roll out of the lab and into the homes of patients who need assistance, the Georgia Tech and Emory research team includes Prof. Julie Jacko, an expert on human-computer interaction and assistive technologies, and Dr. Jonathan Glass, director of the Emory ALS Center at the Emory University School of Medicine. El-E's creators are gathering input from ALS (also known as Lou Gehrig's disease) patients and doctors to prepare El-E to assist patients with severe mobility challenges.

he research was presented at the ACM/IEEE International Conference on Human-Robot Interaction in Amsterdam on March 14 and an associated workshop on "Robotic Helpers" on March 12.

The verbal instructions a person gives to help someone find a desired object are very difficult for a robot to use (the cup over near the couch or the brush next to the red toothbrush). These types of commands require the robot to understand everyday human language and the objects it describes at a level well beyond the state of the art in language recognition and object perception.

"We humans naturally point at things but we aren't very accurate, so we use the context of the situation or verbal cues to clarify which object is important," said Kemp, an assistant professor in the Wallace H. Coulter Department of Biomedical Engineering at Georgia Tech and Emory. "Robots have some ability to retrieve specific, predefined objects, such as a soda can, but retrieving generic everyday objects has been a challenge for robots."

The laser pointer interface and methods developed by Kemp's team overcome this challenge by providing a direct way for people to communicate the location of interest to El-E and complimentary methods that enable El-E to pick up an object found at this location. Through these innovations, El-E can retrieve objects without understanding what the object is or what it's called. 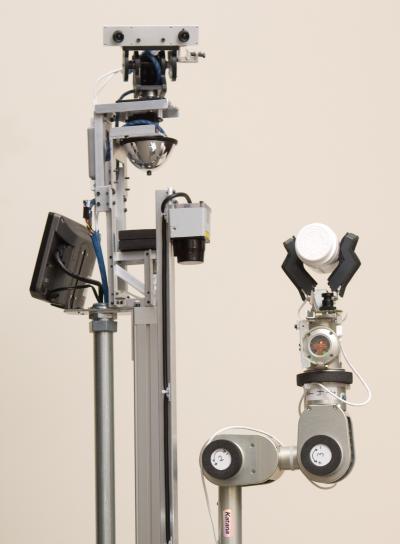 El-E autonomously moves to an item selected with a green laser pointer, picks up the item and then delivers it to the user, another person or a selected location such as a table. Credit: Rob Felt/Georgia Tech

In addition to the laser pointer interface, El-E uses another approach to simplify its task. Indoors, objects are usually found on smooth, flat surfaces with uniform appearance, such as floors, tables, and shelves. Kemp's team designed El-E to take advantage of this common structure.

Regardless of the height, El-E uses the same strategies to localize and pick up the object by elevating its arm and sensors to match the height of the object's location. The robot's ability to reach objects both from the floor and shelves is particularly important for patients with mobility impairments since these locations can be difficult to reach, Kemp said.

El-E uses a custom-built camera that is omni-directional to see most of the room. After the robot detects that a selection has been made with the laser pointer, the robot moves two cameras to look at the laser spot and triangulate its position in three-dimensional space.

Picking up the unknown object is a significant challenge El-E faces in completing its task. It uses a laser range finder that scans across the surface to initially locate the object. Then, after moving its hand above the object, it uses a camera in its hand to visually distinguish the object from the texture of the floor or table. After refining the hand's position and orientation, it descends upon the object while using sensors in its hand to decide when to stop moving down and start closing its gripper. Finally, it closes its gripper upon the object until it has a secure grip.

Once the robot has picked up the item, the laser pointer can be used to guide the robot to another location to deposit the item or direct the robot to take the item to a person. El-E distinguishes between these two situations by looking for a face near the selected location.

If the robot detects a face, it carefully moves toward the person and presents the item to the user so it can be taken. It uses the location of the face and legs to determine where it will present the object.

After delivering the item, the robot returns to the user's side, ready to handle the next request.

El-E's power and computation is all on board (no tethers or hidden computers in the next room) and runs Ubuntu Linux on a Mac mini.

El-E's laser pointer interface and methods for autonomous mobile manipulation represent an important step toward robotic assistants in the home.

"If you want a robot to cook a meal or brush your hair, you will probably want the robot to first fetch the items it will need, and for tasks such as cleaning up around the home, it is essential that the robot be able to pick up objects and move them to new locations. We see object fetching as a core capability for future robots in healthcare settings, such as the home," Kemp said.