A dwarf star with a surprisingly magnetic personality and a huge hot spot covering half its surface area is showing astronomers that life as a cool dwarf is not necessarily as simple and quiet as they once assumed.

Simultaneous observations made by four of the most powerful Earth- and space-based telescopes revealed an unusually active magnetic field on the ultracool low-mass star TVLM513-46546. A team of astronomers, led by Dr. Edo Berger, a Carnegie-Princeton postdoctoral fellow at Princeton University, is using these observations to explain the flamboyant activity of this M-type dwarf that lies about 35 light-years away in the constellation Boötes.

The team’s observations of TVLM513-46546 combine radio data from the Very Large Array, optical spectra from the Gemini North 8-meter telescope, ultraviolet images from NASA’s Swift satellite and x-ray data from NASA’s Chandra X-ray Observatory. This is the first time that such a powerful set of telescopes has been trained on one of the smallest known stars. The study is part of a program that looks at the origins of magnetic fields in ultracool dwarfs, stars that astronomers always assumed were simple, quiet, and more tranquil than their hotter and more massive siblings. 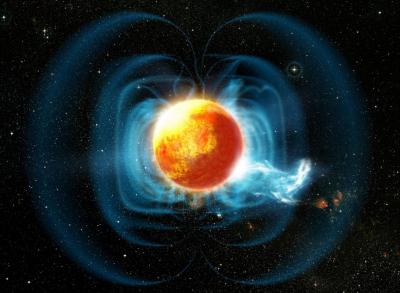 Artist's rendition of what the magnetic fields and surface might look like on TVLM513-46546. Note that the hot-spot that is estimated to cover up to 50 percent of the surface area of the star is oriented to the left of the star and is not entirely visible in this orientation. Credit: Dana Berry, SkyWorks Digital Animation

“With such a unique set of observations you always expect to find the unexpected,” said Berger, “but we were shocked at the level of complexity that this object exhibits.”

The star’s steady radio emission is interrupted with spectacular fireworks displays of minute-long flares. These flares come from the catastrophic collisions and merging of the magnetic fields in the corona of the star; these actions drive the annihilation of magnetic energy like a giant short-circuits in the fields. The team also observed soft x-ray emission and an x-ray flare.

Also for the first time, the group charted optical hydrogen-alpha emission with a period of two hours that matches the two-hour rotation period of the star. “We find a hot spot that covers half of the surface of the star like a giant lighthouse that rotates in and out of our field of view,” said Berger. “We still do not know why only half of the star is lit up in hydrogen and if this situation remains unchanged over days, weeks, years, or centuries.”

Berger describes the dwarf star’s magnetic field as probably being a simple dipole (north-south orientation, like the Earth’s much weaker magnetic field) that extends out at least one stellar radius above the surface. There is also a smaller-scale field that has loops similar to those seen on the Sun, but smaller. “Those loops and arcs occur on random places on the surface of the star, “said Berger. “That’s where the flares originate that last only a few minutes, whereas the overall field doesn’t get disturbed.”

Objects like TVLM513-46546 were once thought to be models of stellar quiescence and simplicity, with little to no magnetic field activity. “Theory has always said that as we look at cooler and cooler stars, the coolest will be essentially dead,” said Berger. “It turns out that stars like TVLM513-46546 have very complex magnetic activity around them, activity more like our Sun than that of a star that is barely functional.”

This one’s complicated magnetic field environment and possible hot spot may indicate some unusual activity beneath the star’s surface (in its dynamo) or possibly even the existence of a still-hidden companion. The idea of an unseen companion as an explanation for the star’s excitable magnetic disposition is an intriguing one, says Berger, but no such object has yet been detected. “The main idea to consider here is an analogy to other systems where the presence of a companion directly or indirectly excites magnetic activity,” he said.

Imagine the interior of the Sun layered like an onion. Its internal convection is the process by which heat from the nuclear fusion at the core is transported by large spinning currents that move through the Sun’s outer layers. Differential rotation is simply the term for the different spin rates of different layers. Together these motions of electrically charged gas spin up the magnetic field structures we see at the Sun.

By contrast, an ultracool M-type star like TVLM513-46546 is fully convective. That is, the zone that transports heat to the surface of the star extends all the way from the stellar surface into the center, like the bubble of a huge boiling pot. Such a simple structure has been predicted to generate a very basic magnetic field structure, perhaps more like the Earth’s than the complex fields we see on the Sun. Why TVLM513-46546 has such a complex field and activity remains to be studied.

In order to find out if this star is just a stellar oddity, or if it might turn out be a typical prototype of ultracool dwarfs, the research team plans to continue with observations of other such stars. The team expects the larger sample to show how other candidate low-mass stars (and brown dwarfs, objects too hot to be planets and too cool to be stars) generate magnetic fields. Berger also notes that he’d like to get more observations to try and spot any possible companions to such stars. “The issue of a possible companion is really pure speculation at this point,” he said. “However, I am trying to get observations that will assess this possibility.”

These results are being published in the February 10, 2008 issue of the Astrophysical Journal. A preprint of the paper can be found at: http://xxx.lanl.gov/abs/0708.1511

Partial studies of magnetic activity on these types of stars have been performed previously, but this is the first time that such a powerful set of telescopes has been simultaneously pointed at the same object.