The transition from ape-like shuffling to upright walking (bipedalism) as we do has long fascinated scientists. Why did it happen? When?

The second question is a little closer to being solved. An analysis of 3.6 million year old hominin footprints in Tanzania suggests our ancestors evolved the hallmark trait of extended leg, human-like bipedalism substantially earlier than previously thought. Many millions of years before humans. Like the chicken and the egg, there is a clear science answer about which came first even if philosophers are baffled.

As you'd expect, fossilized footprints are the only way to deduce how ancestors of humans moved about. To glean answers, scientists have to account for differences in size and use inference. The new examination shows hominins were walking in a way that is very similar to living humans. At least when they walked, these hominins probably looked like us.

Our species, Homo sapiens, emerged roughly 200,000-300,000 years ago. The genus Homo is thought to have emerged about 2-2.5 million years ago. The term hominin is used in a general sense to refer to a broader set of ancestors that existed before that.  It is thought that hominins began walking on two legs around 7 million years ago, but based on the way other primates evolved, it is considered likely that these early ancestors retained a crouched, bent-legged walking posture for some time. 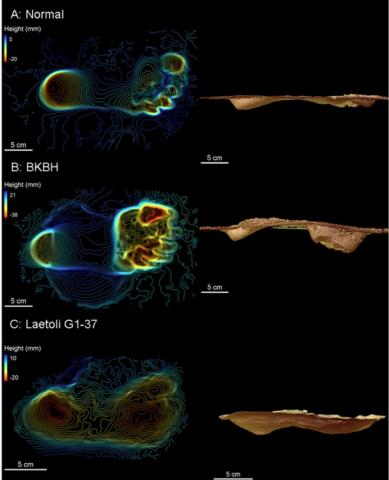 The recent estimate was derived from a combination of experimental data and morphological studies to show that the footprints from Laetoli, Tanzania are consistent with fully upright, human-like bipedal walking. In one experiment, the team compared the depth and shape of the Laetoli footprints to those left by eight volunteers--modern humans--walking in either an upright or stooped posture (in which the knees and hips are bent). When they analyzed the impression made by the toe versus the heel, which reflects how the center of pressure moves along your foot as you take a step, they found the footprints at Laeoli were much more similar to the footprints made by modern humans walking upright.

Walking upright with the legs fully extended uses less energy than bipedal walking in a more ape-like crouched manner, allowing one to endure longer journeys. This suggests that the switch to a more human-like gait likely had something to do with how our ancestors found food--and how far they had to travel to find it. Although the evidence is strong that hominins were walking upright by 3.6 million years ago, the exact stage when the locomotion of our ancestors diverged from that of modern-day apes remains unknown. Answering that will likely require following in more--even older--footprints.