News Staff
Methane detection in the Martian atmosphere haa been a source of debate because methane means a greater possibility for habitability and may even be a signature of life., but spacecraft and telescopic observations from Earth reported no detections of methane, at least not outside the realm of statistical wobble.

Finally, independent measurements report a firm detection in the Martian atmosphere above Gale Crater on 16 June 2013 by the Planetary Fourier Spectrometer onboard Mars Express, one day after the in situ observation of a methane spike by the Curiosity rover.

Methane was not detected in other orbital passages and this detection involved improved observational geometry as well as enhanced data treatment and analysis.

The team also created simulations of the Martian atmosphere using various gas release scenarios to identify a potential source region east of Gale Crater and speculation points to faults of Aeolis Mensae which may extend into proposed shallow ice of the Medusae Fossae Formation which could mean sporadic release of the gas trapped below or within the ice. 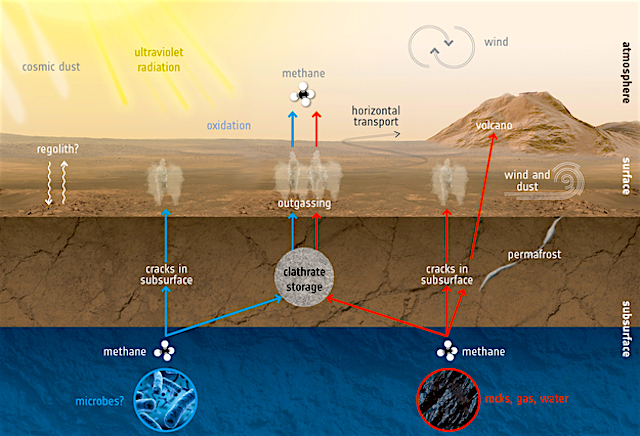 “In general we did not detect any methane, aside from one definite detection of about 15 parts per billion by volume of methane in the atmosphere, which turned out to be a day after Curiosity reported a spike of about six parts per billion,” says lead author Marco Giuranna from the Institute for Space Astrophysics and Planetology in Rome.