Blood pressure and stroke risk increase steadily with sedentary lifestyle, obesity and of course the biggest risk is age. Many want to optimize their time living to prevent debilitating injuries and epidemiologists are happy to find a statistical correlation for everything; that is why some embrace supplements, some embrace organic food, and some embrace alcohol use.

It's never been shown to be true that modest alcohol use is a carcinogen (it is at high levels), in the same way no chemicals are harmful at trace levels ("the dose makes the poison") but there has long been a fad believing that modest intake of alcohol, and even particular types of alcohol, reduce stroke risk. Though the biological plausibility was always lacking epidemiology was able to link improved health with moderate alcohol use.

In the same way that the U.S. National Institute of Environmental Health Sciences (NIEHS), along with allies Ramazzini Institute in Italy and International Agency for Research on Cancer (IARC), can link cancer to any chemical that activists placed inside their organizations target, other groups can link any compound to a positive benefit. It's why publications like the New York Times tout miracle vegetable "studies" every other Tuesday when they aren't cheering on lawsuits against science.(1)

Unsurprisingly, journalists without scientific backgrounds can get sold on the notion that epidemiology is science the way biology, toxicology, and chemistry are, so if epidemiology trumped all of those in a claim, they went with statistical correlation and a compelling story. Red wine was saving hearts and then any alcohol, mainstream media told us.

But it was always 'believe it because you want to believe it' the same way homeopaths, organic food buyers, and probiotic yogurt consumers believe. A recent study of over 500,000 men and women in China who were asked about their alcohol intake and followed for ten years punctured the belief in moderate alcohol stroke benefits.

In over 160,000 adults the researchers measured two genetic variants, rs671 and rs1229984, that substantially reduce alcohol intake- people with the variants experience an extremely unpleasant flushing reaction after drinking alcohol, which reduces their intake. Since those variants are unrelated to other lifestyle risks such as smoking and obesity, they provided an effective way to target heart issues related to alcohol. 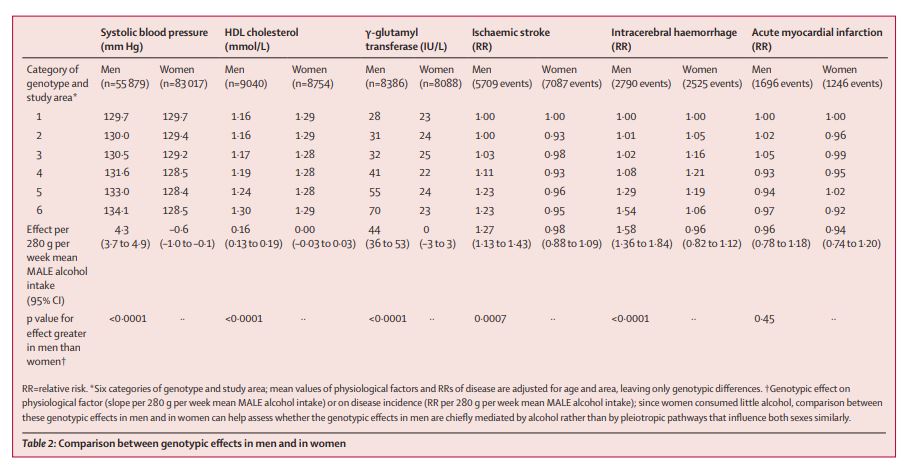 Of course, this was a survey too, people had to be honest about consumption, but "Mendelian randomization" helped with that. Genetic factors, such as the adverse reaction, strongly affect drinking patterns and are allocated randomly at conception but persist lifelong, giving the authors what they believe is the genetic equivalent of a large randomized trial.

Among men, these genetic variants caused a 50-fold difference in average alcohol intake, from near zero to about four units (drinks) per day. The genetic variants that decreased alcohol intake also decreased blood pressure and stroke risk. From this evidence, the authors conclude that alcohol increases the risk of having a stroke by about one-third (35%) for every four additional drinks per day (280 g of alcohol a week), with no protective effects of light or moderate drinking. Of the men with genetic measurements, about 10,000 had a stroke and 2,000 had a heart attack during about ten years of follow-up, so more information is needed on heart attacks.

The authors estimate that among Chinese men alcohol is a cause of 8% of all strokes from a blood clot in the brain and 16% of all strokes from bleeding into the brain and because few women in China drink alcohol (less than 2% of women in the study drank in most weeks, and when they did drink they consumed less than men), they provided a useful control group. In women, the genetic variants that cause alcohol intolerance had little effect on blood pressure or stroke risk, which helps confirm that the effects of these genetic variants on stroke risk in men were caused by drinking alcohol, not by some other mechanism.

(1) Canadians have it even worse. The CBC could practically co-brand  Ramazzini Institute wackiness. They will endorse anything that says science and the modern world are killing us all.