Emotions are an integral part of our lives. They influence our behavior, perceptions, and day-to-day decisions. The spontaneous amodal coding of emotions - independent of perceptual modalities like the physical characteristics of faces or voices - is easy for adults, but how does the same capacity develop in children?

Recent experiments using kids ages 5, 8 and 10 years sought to find out when children began to recognize happiness or anger depending on whether it is expressed by a voice or on a face.

A study compared the ability of children age to make a spontaneous link between a heard voice (expressing happiness or anger) and the corresponding emotional expression on a natural or virtual face (also expressing happiness or anger). The results were that children look at a happy face for longer if they have previously heard a happy voice beginning by age 8. These visual preferences for congruent emotion reflect a child's ability for the spontaneous amodal coding of emotions, i.e. independent of perceptual modality (auditory or visual). 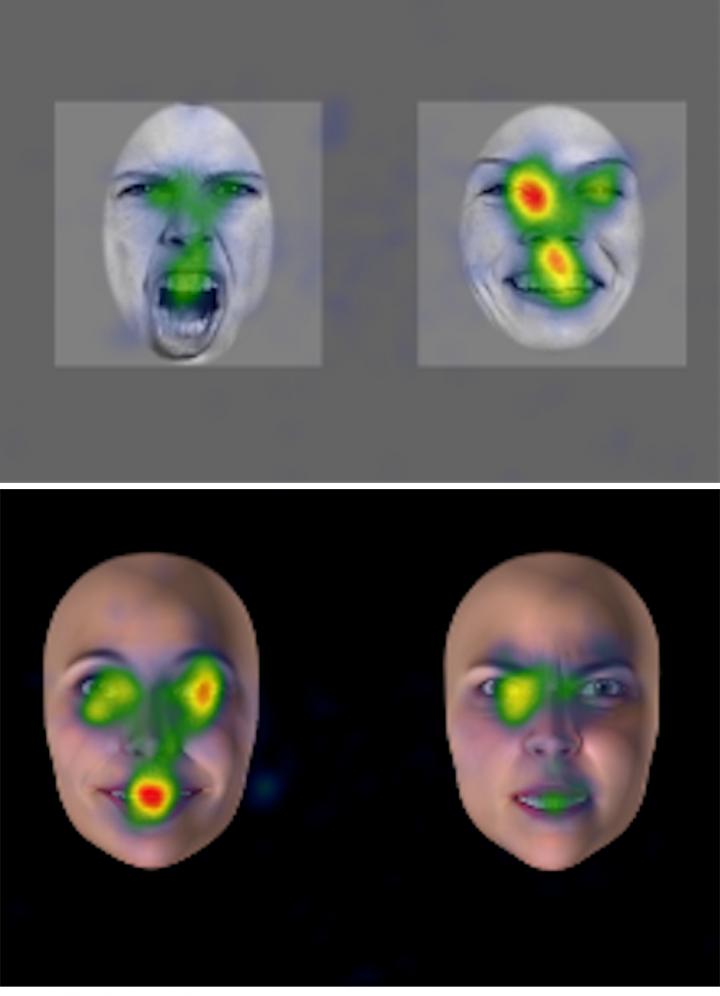 Average durations of all eye fixations in milliseconds for all 80 participants looking at natural faces expressing anger or happiness visualized in the form of a colored card. Credit: University of Geneva

The researchers studied the development of the capacity to establish links between vocal emotion and the emotion conveyed by a natural or artificial face in children age 5, 8 and 10 years, as well as in adults. Unlike more usual studies that include instructions (generally verbal in nature), this research did not call on the language skills of children. It is a promising new method that could be used to assess capacities in children with disabilities or with language and communication disorders.

The research team employed an experimental paradigm originally designed for use with babies, a task known as emotional intermodal transfer. The children were exposed to emotional voices and faces expressing happiness and anger. In the first phase, devoted to hearing familiarisation, each participant sat facing a black screen and listened to three voices - neutral, happy and angry - for 20 seconds. In the second, visual discrimination phase, which lasted 10 seconds, the same individual was exposed to two emotional faces, one expressing happiness and the other anger, one with a facial expression corresponding to the voice and the other with a facial expression that was different to the voice.

The scientists used eye-tracking technology to measure precisely the eye movements of 80 participants. They were then able to determine whether the time spent looking at one or other of the emotional faces - or particular areas of the natural or virtual face (the mouth or eyes) - varied according to the voice heard. The use of a virtual face, produced with CISA's FACSGen software, gave greater control over the emotional characteristics compared to a natural face.

"If the participants made the connection between the emotion in the voice they heard and the emotion expressed by the face they saw, we can assume that they recognise and code the emotion in an amodal manner, i.e. independently of perceptive modalities," explains Amaya Palama, a researcher in the Laboratory of Sensorimotor, Affective and Social Development in the Faculty of Psychology and Educational Sciences at UNIGE.