Ancient Andeans Modified Wild Tubers Into Potatoes, Then The Potatoes Modified Them Back
By News Staff | November 9th 2018 09:02 AM | Print | E-mail

News Staff
Recent DNA analyses show that ancient populations in the Peruvian highlands adapted wild tubers into potatoes - and then those potatoes in turn modified them in ways distinct from other global populations.

Potatoes are native to South America and became an agricultural crop in the Andean highlands of what is now Peru. But wild tubers genetically modified into potatoes did something interesting in return; they altered the genomes of the Andeans who made it a staple of their diet. Co-evolution. This co-evolution between agriculture and human is evident in the configuration of a gene associated with starch digestion in the small intestine - MGAM - in the agricultural ancient Andean genome samples, but not in hunter-gatherers down the coast.

The Andean highlands make an ideal natural laboratory for ancient DNA studies, due to the strong selective pressure needed for ancient populations to adapt to altitudes over a mile in the air. Frigid temperatures, low oxygen levels and intense ultraviolet radiation make the highlands one of the most extreme environments that human beings have occupied.

The study looked at seven ancient whole genomes from the Lake Titicaca region of the Andean highlands of Peru, dating back from 1,800 to 7,000 years. The researchers also compared the ancient whole genomes with 64 modern-day genomes from both highland Andean populations and lowland populations in Chile, to identify genetic adaptions that took place before the arrival of Europeans in the 1500s.

By comparison, European populations that began consuming more grains with the rise of agriculture show different genomic changes. Their genomes have an increased number of copies of the gene coding for amylase, an enzyme in saliva that breaks down starch. 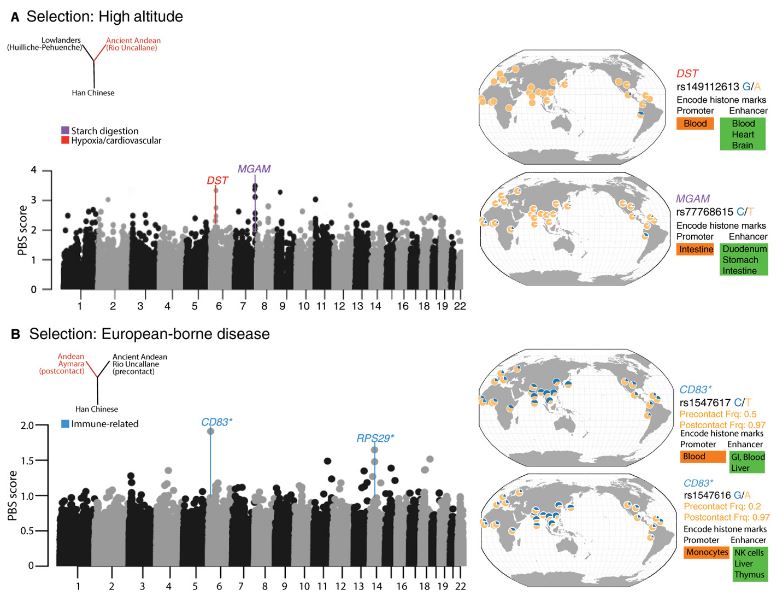 (A) PBS scans testing for differentiation along the Ancient Andean branch, with respect to the lowland population of the Huilliche-Pehuenche. (B) PBS scan testing for differentiation along the modern Aymara branch (post-European contact), with respect to the precontact ancient population of the Rio Uncallane. Selected global SNP frequencies (Frq) (64) and histone modifications (38) are shown on the right, which are relevant to the strongest selection signals. “*” indicates closest gene. GI, gastrointestinal tract; NK, natural killer.