Do you want robotic efficiency, a car that won't stop at a cross-section when no other cars are around, or automation that emulates average human driving and not only stops but even peeks ahead to get a better "view" like a human might? The surprising result was that efficiency was not the overwhelming winner; people today prefer a blend of both.

This was only a small pilot group - 43 people - who were placed in a large warehouse designed to resemble a pedestrianized area in a town center with routes that included a range of junctions. Half were given four journeys around the route in an autonomous vehicle driving with full machine efficiency using all its capabilities to drive in as safe and efficient manner as possible while the others were given four around the route in autonomous vehicles that tried to closely emulate average human driving patterns.

The machine driven AVs were left to make use of all of their sensors and ability to communicate with vehicles that may out of line of sight to decide whether to enter a junction. If their sensors said it was safe and their communications with other vehicles indicated no approaching threats they would simply enter the junction without stopping. If however they detected a vehicle that they believed should have right of way - even if it was not yet visible to the human passenger they would stop and let that vehicle pass. In contrast The AV's emulating human driving would always stop at a junction and would even edge into the junction as if the peek at what the oncoming traffic might be.

Participants scored the level of trust in the autonomous vehicles.

There was only a marginal difference in trust between the two driving methods. The efficient machine method was slightly favored but even that small gap between the two driving styles narrowed over the four runs. What was noticeable for both the "machine" and "human" driving styles is that confidence in both grew with each new round suggesting that simple familiarity and growing accustomed to the experience will be one of the most effective ways of quickly building trust and acceptance of autonomous vehicles once their use becomes more widespread. 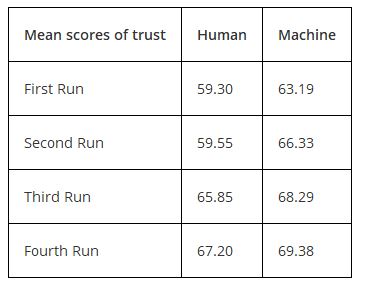 "The overall trust in both driving methods grew with every run. In the machine-like driving style this was steady upwards curve throughout the four journeys but in human-like behavior there was a particularly steep change upwards in the scores between runs 2 and 3. The passengers in the experiment also acknowledged that future generations may be more comfortable with AVs and its features, as they learn to live with the new technology," said Dr. Luis Oliveira of the University of Warwick.
News Articles
More Articles All Articles
About