News Staff
The South Atlantic Anomaly has people concerned, but if Earth's magnetic field of the past is any indication, and it is, the anomaly is not a precursor of a switching of the poles.

What is the South Atlantic Anomaly?

Earth's magnetic field serves as a shield against hazardous radiation from space, like the Sun's charged particle flux. Since 1840, when systematic measurements began, the global strength of the magnetic field has decayed at a rate of about five percent per century. And a significant anomaly of reduced magnetic strength has appeared over the South Atlantic, which as been dubbed the South Atlantic Anomaly. It is found to have a significant reduction in the strength of Earth's magnetic field compared with areas at similar geographic latitudes.

Some have speculated this anomaly is a sign of an imminent reversal of the Earth's magnetic poles.

For answers, we can look to the past.

During this time interval there were two occasions when weak magnetic field over the South Atlantic and South America resembled today's field. In both cases the field strength in this region increased again after some time and the anomaly disappeared. The low intensity areas did notlead to a reversal of the poles.

41,000 years ago, a short-lived reversal of the poles occurred, the so-called Laschamp excursion. During this time, Earth's magnetic field switched polarity for less than one thousand years, with the pole returning to its original polarity. At the beginning of the excursion, the field showed a significantly different pattern of reduced magnetic strength across Earth's surface than today. 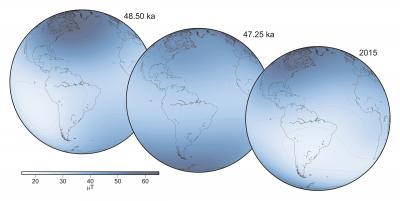 Observations of the past 50,000 years we conclude that the South Atlantic Anomaly cannot be interpreted as a sign for the beginning of a reversal of the poles. Times of the past that, unlike the beginning of the Laschamp excursion, showed patterns of the magnetic field like today were not followed by a pole reversal. After some time the anomalies disappeared.

So how long will the current anomaly persist? It's hard to say. It is possible that the strength of the field will further decay for several centuries. The last reversal of the poles towards today's orientation took place 780,000 years ago. It may take thousands of years before the magnetic field reverses again.