News Staff
Fecal pollution can explain a lot of the increase in resistant bacteria where humans live, but not all of it. In some cases resistance genes were common without the presence of “crAssphage”, a bacteriophage common in human feces  - environments polluted with high levels of antibiotics from manufacturing, according to a new paper.

Antibiotic resistance is nature at work. Bacteria survived for billions of years by adapting to things, including other parts of nature and antibiotics, designed to kill them. In some instances, the antibiotic resistance problem was accelerated by "defensive" medicine. In the past, if a patient insisted they needed antibiotics for a virus, it was not going to work, but hospitals regarded an unneeded medication as superior to lawsuits and complaints about how they were too greedy to give them life-saving treatment for their cold. There was also a craze in antibacterial soap being marketed to every expectant parent because hospitals use it.

Wastewater treatment plants work well for removing antibiotic resistant bacteria and resistance genes from sewage, but trace levels can remain. And since the dose makes the poison, when far too many people were buying antibacterial soap, even trace levels added up. In some high-resistance environments, such as in China, and some areas in the UK, the treatment plants don't work that well or may not exist, so it can be correlated to poor sewage infrastructure. In one India instance, some of the higher levels were linked to manufacturing of antibiotics rather than sewage. 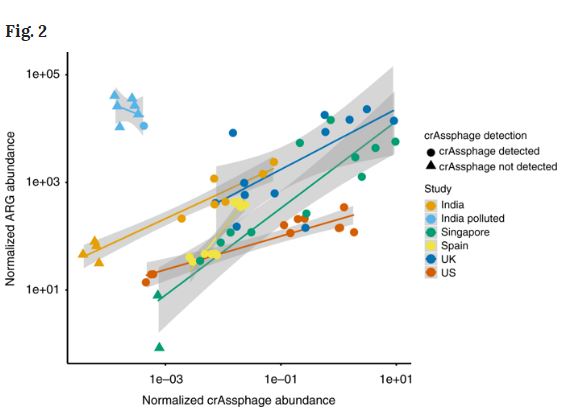 Correlation between ARG abundance and crAssphage abundance in environments with pollution from WWTPs, hospitals, or drug manufacturing. The environments effected by drug manufacturing are polluted with exceptionally high levels of antibiotics, and the analyses show clear selection for antibiotic resistance as the ARG abundance cannot be explained by fecal pollution. ARG abundance and crAssphage abundance were normalized with total nucleotide count in the metagenomes. For samples where we did not detect crAssphage (indicated by triangles), half of the detection limit (corresponding to one read mapping to crAssphage) was used and normalized to the total nucleotide count. Credit: DOI 10.1038/s41467-018-07992-3