News Staff
Prosthetics may look better but they have not really changed much in the last 100 years. That could soon change. The next generation of hand prosthetics may be far more like a real hand - they could allow the wearer to reach for objects almost automatically, without really thinking, like real hands do now.

Current prosthetic hands are controlled via myoelectric signals - that is electrical activity of the muscles recorded from the skin surface of the stump.In the US there are 500,000 upper limb amputees a year.

A new bionic hand is fitted with a camera which instantaneously takes a picture of the object in front of it, assesses its shape and size and triggers a series of movements in the hand. This may bypass the usual processes which require the user to see the object, physically stimulate the muscles in the arm and trigger a movement in the prosthetic limb. Instead, the hand 'sees' and reacts in one fluid movement. 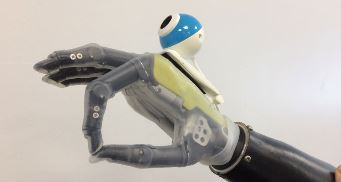 Using neural networks, the basis for what could eventually become Artificial Intelligence, lead author on the study Ghazal Ghazaei showed the computer numerous object images and taught it to recognize the 'grip' needed for different objects. Grouping objects by size, shape and orientation, according to the type of grasp that would be needed to pick them up, the team programmed the hand to perform four different 'grasps': palm wrist neutral (such as when you pick up a cup); palm wrist pronated (such as picking up the TV remote); tripod (thumb and two fingers) and pinch (thumb and first finger).

Using a cheap camera fitted to the prosthesis, the hand 'sees' an object, picks the most appropriate grasp and sends a signal to the hand; all within a matter of milliseconds and ten times faster than any other limb currently on the market.

A small number of amputees have already trialled the new technology and the developers next want to offer the 'hands with eyes' to patients at Newcastle's Freeman Hospital.

"Responsiveness has been one of the main barriers to artificial limbs. For many amputees the reference point is their healthy arm or leg so prosthetics seem slow and cumbersome in comparison," says Dr. Kianoush Nazarpour, a Senior Lecturer in Biomedical Engineering at Newcastle University. "Now, for the first time in a century, we have developed an 'intuitive' hand that can react without thinking."