News Staff
In large systems of interacting particles in quantum mechanics, groups of particles can begin to behave like single particles.

Physicists refer to such groups of particles as quasiparticles and while they live, they are useful in helping us understand superconductivity and superfluidity. But many quasiparticles die after less than one second.

What kills them? How do quasiparticles die? 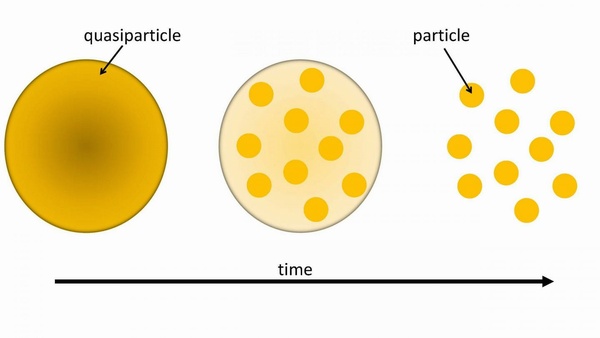 Far from a negligible effect, the authors demonstrate through investigations of a particularly 'clean' quasiparticle, an impurity in an ultracold atomic gas, where the authors find strong evidence of many-body dephasing in past experimental results.

So many-body dephasing can even dominate over other forms of quasiparticle death.

Two spin states (red and green) of an impurity embedded in a Fermi sea (blue) are coupled together and undergo Rabi oscillations with an effective frequency Ω and damping rate ΓR. The damping rate is dominated by many-body dephasing.

Through extensive simulations and new theory, the authors show that an established experimental protocol--Rabi oscillations between impurity spin states--exhibits the effects of many-body dephasing in the repulsive Fermi polaron.

These previously unrecognized results provide strong evidence that many-body dephasing is fundamental to the nature of quasiparticles.
News Articles
More Articles All Articles
About