News Staff
If we want to get a snapshot about what the ancient ways really meant for food, we need look no further than the Amazon, where despite living in the most biodiverse place on Earth, people go hungry.

The reason is simple; they don't harness nature, they exist at the whim of it.

Ribeirinhos live alongside rivers in Brazil's Amazonian floodplain forests but struggle to catch enough fish to eat and can go hungry. The reason is nature. The Purus River undergoes one of the largest annual variations in water levels on the planet. When it floods, large areas of forest become submerged. River fish populations disperse making them much harder to catch. They can't feed themselves even with a sparse rural population

Dams would fix that without but in the United States environmental groups oppose any modification to land, believing a metaphorical "balance of nature" is literal despite it being dismissed by scientists a century ago. A new paper which interviewed residents from 22 rural communities at least 6 miles apart from each other covering a distance along the river of 600 miles shows they'd be better off if they had more modern practices. Ribeirinhos often live far away from shops and lack electricity. They don't have refrigeration keep livestock. They obtain a large proportion of their calories, macronutrients and micronutrients from catching fish and spend a large proportion of their caloric intake catching them. 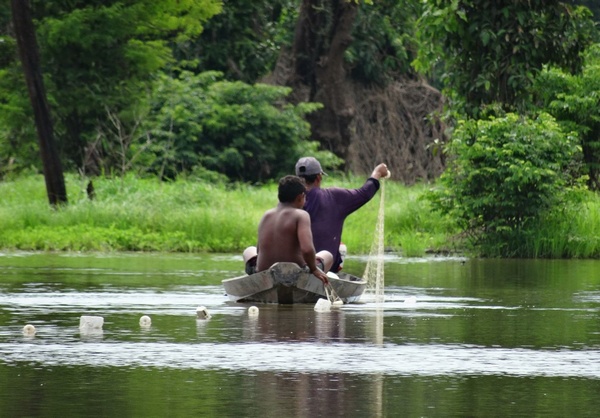 Ribeirinhos fishing for pirarucu (Arapaima gigas) in a lake beside the River Purus. Credit: Daniel Tregidgo

During the all natural seasonal floods local they must spend around three times as long fishing compared to low water levels. The fishing more hooks and different habitats, like flooded forests. When that fails they try for bushmeat. Amazonian várzea forests are biologically rich and have low human population densities but the population is forced to remain highly dependent on the whiplash of their seasonally-transformed ecosystem. The food deprivation has lifelong health consequences for pregnant women and kids.

Western countries won't allow new dams in the Amazon but more effective management of rivers and forests is vital to ensure that remote native communities can feed themselves. As throughout history, food insecurity in the Amazonian rainforest hits the poorest hardest. Only the least-poor minority of ribeirinhos are able to protect themselves from seasonal food scarcity.

What might help? Reliable provision of school meals in rural areas to help support the diets of children in vulnerable households during times of low fish catches. Relying on nature remains fine for American environmental fundraising brochures but it fails in practice, as it long has for those outside the most productive farmland.
News Articles
More Articles All Articles
About