News Staff
Though we read a lot of claims about impending extinction, the biological reality is that we don't know anything about 99.9999999 percent of species that have ever lived. And then there are species only newly discovered that are immediately declared endangered because an academic only recently named them in a print journal.

Sometimes things are declared extinct because we just didn't look all that hard. Like the Lahontan cutthroat trout (lacustrine LCT). Weighing in at 40 pounds, with stories of the trout getting up to 60, the Lahontan is the largest species of cutthroat trout and Nevada's state fish. The fish are characterized by their crimson red-orange slash marks on the throat under the jaw with black spots scattered over their steel gray to olive green scales.

They were never told they were extinct so they kept on procreating. But it was a while before biologists tested the fish in the Pilot Peak streams to see if it was the original species of the Truckee River watershed. They did so by obtaining samples of the Lahontan cutthroat stored in museums and comparing those the DNA to the Pilot Peak trout. 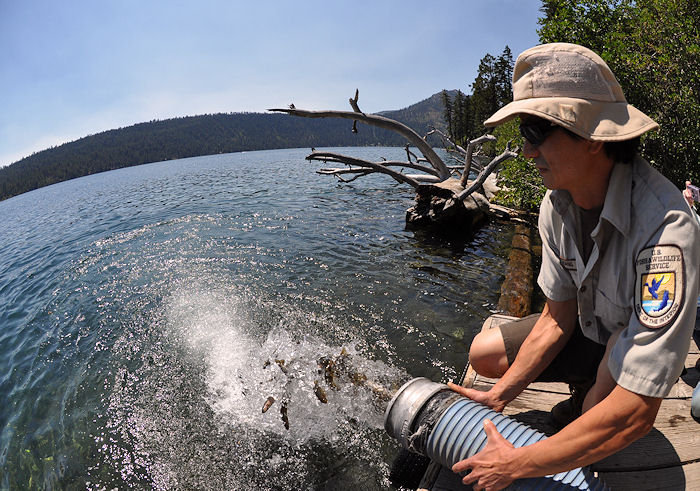 Overharvesting and  the introduction of invasive species began reducing the population of the trout and by the 1940s it was gone from the Truckee River watershed. But in the early 1900s, before the federal government centralized control of conservation, ecologists took small fish from Pyramid Lake and Lake Tahoe and placed them in streams in eastern Nevada and across the border in Utah. The Pilot Peak streams were fish-less, and the Lahotans survived.

Many never believed it was extinct at all. In the 1970s, biologist Robert Behnke identified a small fish in the Pilot Peak streams as the Lahontan cutthroat trout but there were no genetic tools to determine if the fish was the same species.

In 2006, the U.S. Fish and Wildlife Service stocked the Pilot Peak strain back into its home waters in Pyramid Lake. The fish thrived for several years, growing bigger and bigger. In the early 2000s people began catching 20-pound cutthroats. Today, anglers are catching trout up to 30 pounds.