Canine leishmaniosis is a potentially fatal infection caused by the parasite Leishmania infantum, carried by the female sand fly and transmitted in its bite. It is zoonotic, so can be passed on to people but dogs have been known to pick up the infection after being bitten or wounded by another infected dog.

That's rare, and in the UK cases to-date have only been associated with blood transfusion, breeding programs, or overseas travel but a 3 year old neutered male shih tzu cross, which had been with its owner since a puppy and had none of the known risk factors for infection, was recently diagnosed with leishmaniosis in Hertfordshire.

Dog to dog transmission is the most likely explanation, suggest the authors of a new paper on this first instance, because another dog in the household that had been imported from Spain, had had to be put down six months earlier after developing severe leishmaniosis. 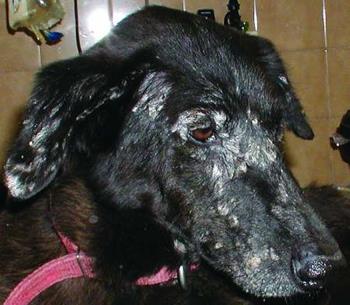 "To the authors' knowledge, this is the first reported case of leishmaniosis in the UK in a dog without a history of travel to an endemic area," they write. "In an era of increased foreign travel of dogs and increased importation of dogs to the UK, it is likely that the number of dogs seropositive for L infantum will continue to increase," they warn.

"Leishmania-infected dogs may present an infection risk to other dogs, even in the absence of natural vectors, as direct transmission between dogs is possible."

A second case of canine leishmaniosis in a dog with no obvious risk factors has now also come to light in a different part of the UK. The vets described the case of a 3-year-old fully vaccinated male neutered English pointer that was eventually diagnosed with leishmaniosis.

The dog had never traveled outside of the UK, or beyond the borders of Essex, where it lived. But its owners had lived in Spain and traveled to the Jalón Valley (between Alicante and Valencia) without their pet in the summer of 2018. Unlike the first case, this dog was not living, or in regular contact with another infected dog, and it may be that infected sand flies were inadvertently brought back in the owners' transport, luggage, or clothing, suggest the authors.

Pet owners planning on overseas travel with their dog should seek advice from a vet while those who already own an imported rescue dog should contact their local vet for advice on testing and treatment for any underlying conditions.