News Staff
This fall we will get a new "Teminator" movie, marking 35 years that a dystopian nightmare about robots taking over and killing us all has been front and center in pop culture awareness.

The dystopian nightmare may happen to fish first. Swimming terminators could be ready to fight against one of the world's most problematic invasive species, the mosquitofish.

Found in freshwater lakes and rivers worldwide, soaring mosquitofish populations have decimated native fish and amphibian populations, and attempts to control the species through toxicants or trapping often fail or cause harm to local wildlife.

The first experiments to gauge the ability of a biologically inspired robotic fish to induce fear-related changes in mosquitofish have been published. Their findings indicate that even brief exposure to a robotic replica of the mosquitofish's primary predator -- the largemouth bass -- can provoke meaningful stress responses in mosquitofish, triggering avoidance behaviors and physiological changes associated with the loss of energy reserves, potentially translating into lower rates of reproduction. 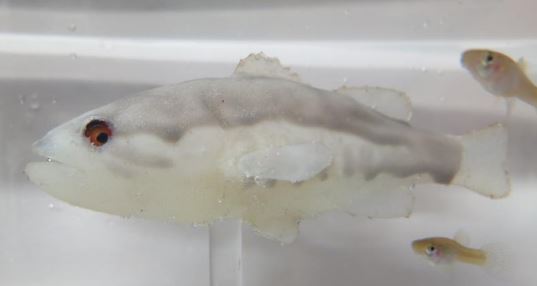 The team exposed groups of mosquitofish to a robotic largemouth bass for one 15-minute session per week for six consecutive weeks. The robot's behavior varied between trials, spanning several degrees of biomimicry. Notably, in some trials, the robot was programmed to incorporate real-time feedback based on interactions with live mosquitofish and to exhibit "attacks" typical of predatory behavior -- a rapid increase in swimming speed.

Interactions between the live fish and the replica were tracked in real time and analyzed to reveal correlations between the degree of biomimicry in the robot and the level of stress response exhibited by the live fish. Fear-related behaviors in mosquitofish include freezing (not swimming), hesitancy in exploring open spaces that are unfamiliar and potentially dangerous, and erratic swimming patterns.

The researchers also measured physiologic parameters of stress response, anesthetizing the fish weekly to measure their weight and length. Decreases in weight indicate a stronger anti-predator response and result in lower energy reserves. Fish with lower reserves are less likely to survive long and devote energy toward future reproduction - factors with strong implications for population management in the wild.