News Staff
States that have expanded Medicaid coverage as part of the Affordable Care Act have higher numbers of individuals with disabilities employed that states that did not.

The humanities scholars analyzed data from the nationally representative Health Reform Monitoring Survey. The data showed that in 2013, 41.3 percent of individuals with disabilities in expansion states reported being employed or self-employed. In 2017, that number rose to 47 percent. In the same timeframe, the percentage of the same population that reported not working because of disability dropped from 32 to 27 percent. Those trends were not present in nonexpansion states. The data analyzed for the study was from December 2014, when 26 states and the District of Columbia had expanded Medicaid. As of this month, 33 states and the District of Columbia have decided to expand coverage.

"We corrected for employment statistics in all states. If unemployment rates were already lower in a state, we controlled for that when looking at disability and employment," said Professor Jean Hall of the University of Kansas department of applied behavioral science. 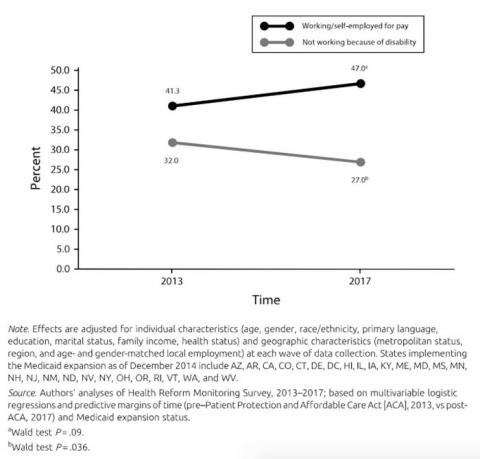 Percentage of individuals with disabilities in Medicaid expansion states reporting employment and not working because of disability.Credit: Jean Hall, Adele Shartzer, Noelle Kurth, and Kathleen Thomas

Of course, this leads to questions. Do people with disabilities move to states where government programs are better? Are companies acting as free riders? Does the cost of the health insurance come close to the salary benefit to the employee? The authors argue the benefits are more social. Having coverage and being able to gain employment makes individuals more independent, lowers unemployment and results in more people paying taxes and boosting state economies, while simultaneously reducing the number of people reliant on government programs such as food stamps, housing and child care subsidies and others. Though obviously if taxpayers are funding health care then an unemployment statistic (which only measures who is getting unemployment benefits, long-term disabled are not included) is not meaningful. If employment was the only concern, and cost does not matter, the government would just create jobs for everyone unemployed.

So the social aspect is the big benefit. Is that important enough to warrant the increased cost? Even in states that say the Affordable Care Act is winning, like California, saw premium increases 4X the rate of inflation.
News Articles
More Articles All Articles
About