News Staff
Nature is out to kill everything so a newborn animal must learn to walk on its legs as fast as possible to avoid predators. Learning the precise coordination of leg muscles and tendons takes some time and initially baby animals rely heavily on hard-wired spinal cord reflexes. More advanced and precise muscle control lead to the nervous system becoming well adapted to the young animal’s leg muscles and tendons.

No more uncontrolled stumbling – the young animal can now keep up with the adults.

Researchers at the Max Planck Institute for Intelligent Systems (MPI-IS) in Stuttgart wanted to figure out how animals learn to walk and learn from stumbling. So they built a four-legged, dog-sized robot, that helped them figure out the details. And then a learning algorithm to optimize the virtual spinal cord 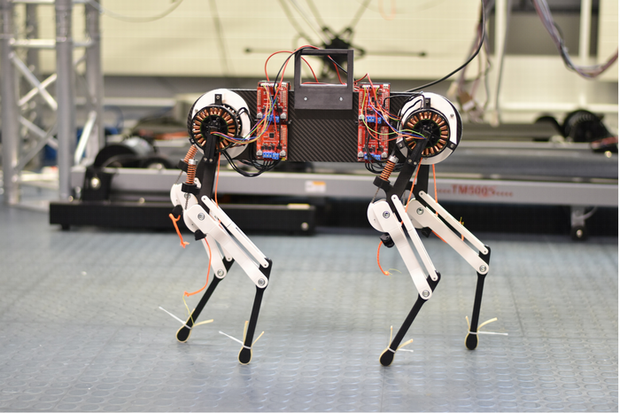 The dog, named Morti, used a Bayesian optimization algorithm to guide the learning: the measured foot sensor information is matched with target data from the modeled virtual spinal cord running as a program in the robot’s computer. The robot learned to walk by continuously comparing sent and expected sensor information, running reflex loops, and adapting its motor control patterns.

The learning algorithm adapts control parameters of a Central Pattern Generator (CPG). In humans and animals, these central pattern generators are networks of neurons in the spinal cord that produce periodic muscle contractions without input from the brain. Central pattern generator networks aid the generation of rhythmic tasks such as walking, blinking or digestion. Furthermore, reflexes are involuntary motor control actions triggered by hard-coded neural pathways that connect sensors in the leg with the spinal cord.

The same holds true for the Labrador-sized robot-dog named "Morti". Even more, the robot optimizes its movement patterns faster than an animal, in about one hour. Morti’s CPG is simulated on a small and lightweight computer that controls the motion of the robot’s legs. This virtual spinal cord is placed on the quadruped robot’s back where the head would be. During the hour it takes for the robot to walk smoothly, sensor data from the robot’s feet are continuously compared with the expected touch-down predicted by the robot’s CPG. If the robot stumbles, the learning algorithm changes how far the legs swing back and forth, how fast the legs swing, and how long a leg is on the ground. The adjusted motion also affects how well the robot can utilize its compliant leg mechanics. During the learning process, the CPG sends adapted motor signals so that the robot henceforth stumbles less and optimizes its walking. In this framework, the virtual spinal cord has no explicit knowledge about the robot’s leg design, its motors and springs. Knowing nothing about the physics of the machine, it lacks a robot ‘model’.
News Articles
More Articles All Articles
About